Statement on the US Supreme Court Ruling: West Virginia vs. the Environmental Protection Agency 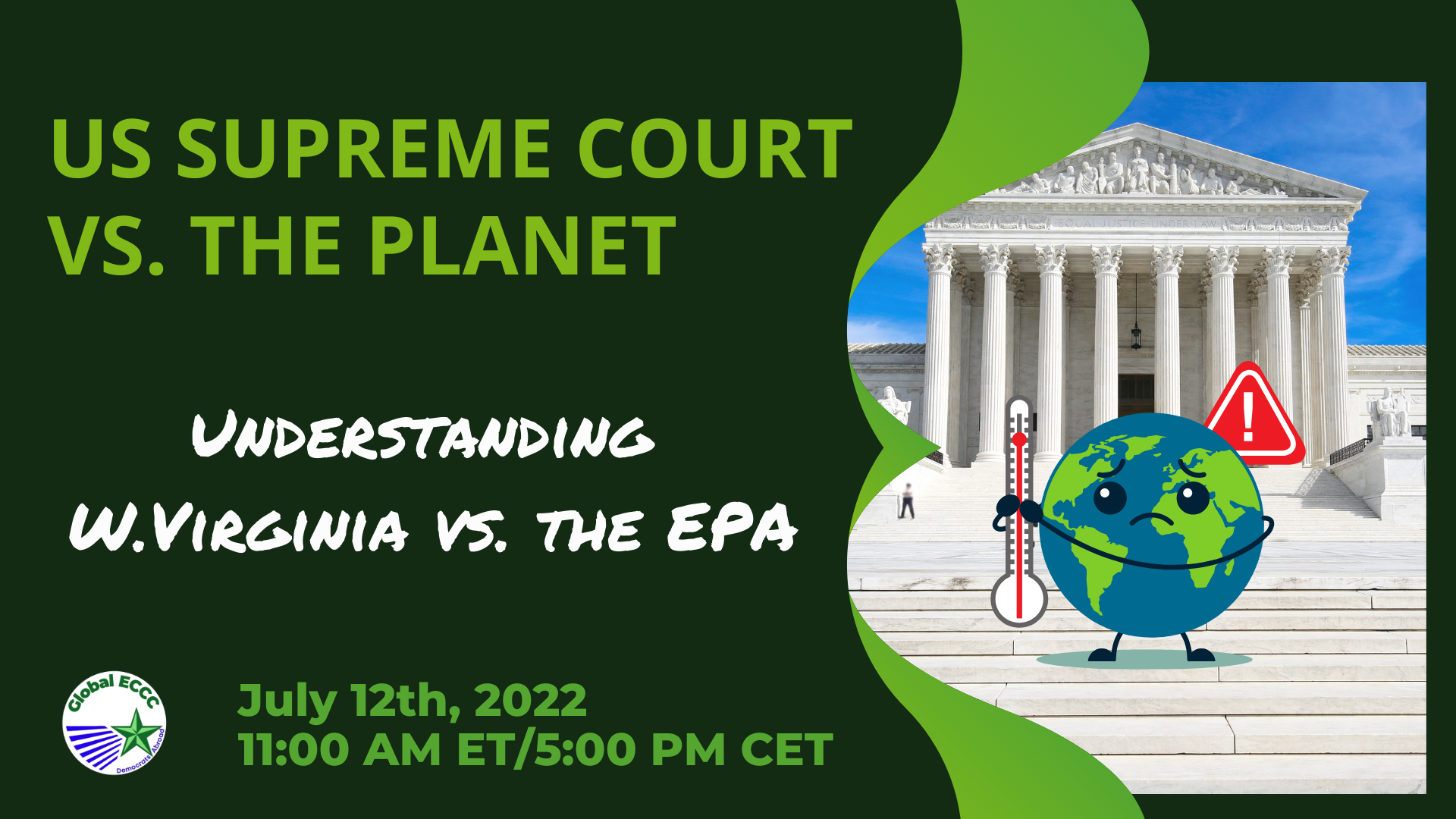 Last week, the Supreme Court issued a string of decisions with devastating consequences for citizens in the US, and in the latest case, for populations globally. The rulings range from states’ ability to control gun safety, the separation of church and state, and the bombshell reversal of Roe v. Wade, turning back 50 years of precedent on women’s reproductive rights and privacy.

The final decision delivered last week was West Virginia vs. the Environmental Protection Agency, which will reverberate across the planet, as the US (the second-largest greenhouse gas emitter globally) tries to meet its pledge to cut its emissions by 50% by 2030. These decisions are ALL deplorable and reflect a politically radicalized slate of Republican Supreme Court justices.

West Virginia vs the EPA effectively eviscerates the government’s power to regulate a significant source of the carbon emissions destabilizing the world. This ruling not only impacts the safety and future of our own country, but it also imperils planetary sustainability.

The EPA’s capacity to regulate CO2 under the Clean Air Act is now largely reduced. In practical terms, the decision prevents the agency from setting carbon-emission limits as a way to force the entire power generation industry to move away from burning coal to other, less-polluting energy sources-something the Obama Administration had attempted to do with its Clean Power Plan.

The ruling limits the EPA's authority, and it will potentially impede other agencies from enacting a broad array of regulations to protect the environment and public health. The case was the result of a coordinated, multi-year strategy by conservative legal activists, Republican Attorneys General, and their funders, to harness the judicial system to rewrite environmental law and weaken the executive branch’s ability to address global warming. They argue that only Congress should have the power to set rules that significantly affect the American economy.

Justice Elena Kagan wrote in her dissenting comments, “The court appoints itself- instead of congress or the expert agency – the decision-maker on climate policy…I cannot think of many things more frightening.”

Michelle Deatrick of the DNC’s Environment & Climate Crisis Council responded: “The responsibility now falls to Congress to undo the damage this court has done. And the clock is ticking. The climate crisis is not coming. It is here now. And the ruling by this court will make this crisis exponentially worse.”

Until now, Congress has been gridlocked on climate legislation, and has, therefore, failed to regulate and take a stand on the future of the planet. This lack of action by lawmakers has increased the federal government’s reliance on regulations to lower US greenhouse gas emissions. We have to put politicians in place who understand what is at stake. The legislative branch of government must now balance this overreach by our highest court.

With this ruling, President Biden now has a mandate and opportunity to put climate back at the top of his agenda. Legislation that has been sidelined must be revisited and pushed through, AND the President must declare the climate crisis a National Climate Emergency! If the United States, the largest emitter of greenhouse gas in history, fails to meet its climate targets, the world will likely be unable to keep global warming below the 1.5-degree pre-industrial levels, ensuring increasingly catastrophic droughts, heat waves, flooding, and widespread extinctions.

Urgent action is required! What can you do?

Finally, please join us for our special event, US Supreme Court vs. the Planet: Understanding West Virginia vs. the EPA, to discuss the implications of this ruling and to better understand the options before us. The forum will be held at 11:00 AM  EDT/5:00 pm CEST time on Tuesday, July 12th on zoom. Please RSVP here.