DAI Southern Chapter Chair Rebecca Spitzmiller helped organize a successful World Cleanup Day 2021 here in Rome along the Tiber River. Hundreds of volunteers participated in Terra Roma. Here is the article that was published in the Veneto Views: 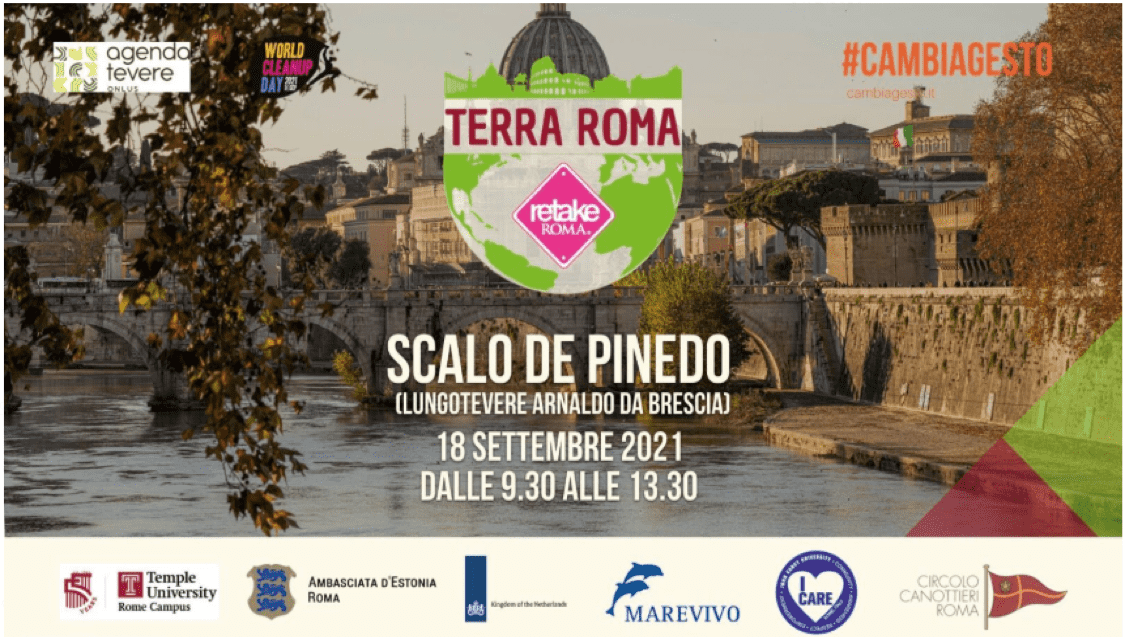 WORLD CLEANUP DAY is one of the biggest civic movements of our time, uniting volunteers across the world for a cleaner planet. This year’s World Cleanup Day was held on Saturday, September 18, and brought together over 25 million people across 190 countries for the cause.

In Italy, Retake Roma and its sister affiliations in cities across Italy rose to the occasion. In Rome alone, the grassroots organization unleashed about 1000 of it volunteers – known as Retakers – to carry out its multiple-site event featuring five separate cleanup sites along the Tiber River.  Dubbed “TERRA ROMA,” the event gained massive support from the community: 45 different organizations pitched in, – including NGOs, universities, embassies and business enterprises – uniting Romans and the international community along the shores of the Tiber River as it crisscrosses the Capital.

Angel has been living in Italy since July 2016. They currently live in Rome and work as an English teacher. In addition to teaching, Angel is also currently studying computer science online through an American university.

This is their first year working with Democrats Abroad, though they have a few years of prior experience on the board of a nonprofit organization (associazione culturale) here in Italy.

Angel is passionate about democracy and human rights and is excited to work on the DA Italy team.

Daniela is a New Yorker, now living in Rome after doing an “Under the Tuscan Sun” stint in the rolling hills surrounding Greve in Chianti.  Her field of expertise – and her passion - is contemporary art, for which she is a consultant.

Currently she has strayed farther afield, and is writing an abecedarium of interdisciplinary essays on Italy. She is vice president of the board of trustees of St. Stephen’s School in Rome, a non-profit, non-denominational American and international high school and boarding school.

She joined Democrats Abroad recently because, for the first time in her life, the unimaginable has reared its ugly head: the possibility that US democracy could topple under the weight of the swelling ranks of authoritarian forces.

She is looking forward to working together to make sure our Constitution and the founding principles of our nation are not only secure, but deepened. As it stands today, that can only be accomplished by getting Democrats elected, which is why even from afar we can do our part.

Helenka joined DA when “You Know Who” started running as the GOP candidate for president in 2015. She is from NYC, and couldn’t bear the idea that the man who helped destroy NYC was going to help destroy the USA.

She works as a Language Editor, helping people write more effectively in English. Specifically, she helps prepare scientific articles for publication in peer review journals. She studied to become an ESL teacher, and came to Rome after graduate school to get some teaching and life experience. She thought she would go back home after 2 years, but 35 years have passed and she is still here!

Her achievements include participating in the FIGB (Italian Bridge Federation) National Championships in Salsomaggiore Terme. She calls herself as a nerd (but everyone knows that!), and doesn’t mind spending a lot of time on minute details, looking for spelling mistakes in a document or fact checking, for example. Her goals include learning another language, such as German or Greek. 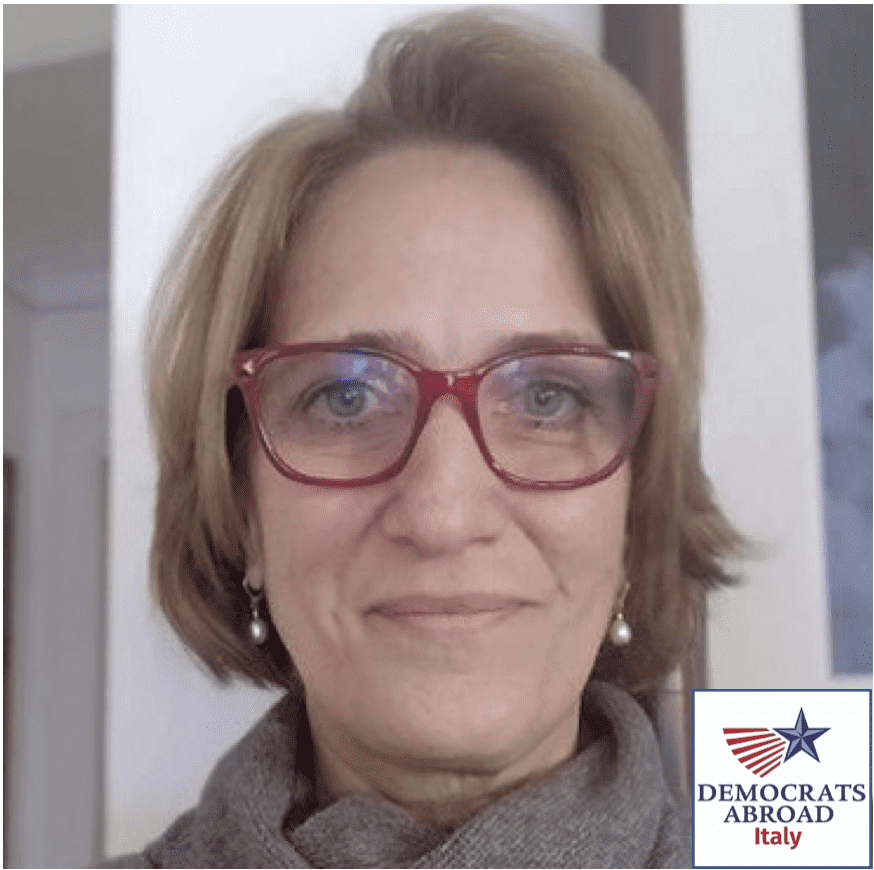 Rebecca is a law professor at Roma Tre University, where she also coordinates "Studying Law at Roma Tre," through which the only US-Italy dual-law degree is offered. She also teaches law and business courses at Italy’s Scuola Superiore della Magistratura, Scuola Superiore dell’Avvocatura, Luiss Business School and CIEE Global Institute Rome – and translates and consults for international law firms.

She is the co-founder of Retake Roma, one of Italy’s most innovative, grassroots social movements, comprising some 85 neighborhood groups in Rome and in 40 cities across the peninsula.

In 2018 Italy’s President Sergio Mattarella awarded her for Retake’s efforts, naming her an “Officer of the Order of Merit of the Italian Republic,” citing “her engaging commitment to the fight against degradation, for raising awareness for the value of common goods, and diffusing a sense of civic pride upon the territory of Roma Capitale."

As chair of DA Italy’s Southern Chapter, she wants to harness the potential of thousands of Americans living in Italy and engage them in the conversations and activities that will lead them to vote, so that together we can help restore our most deeply held democratic values in US domestic and foreign policy.

Across the United States this year, eight states, including Alabama and Missouri, have passed bans or bills restricting abortion.

On Tuesday, May 21, 2019, citizens across the United States are gathering in front of statehouses, town squares, and courthouses to protest this latest wave of legislation. Women’s March Rome will be standing in solidarity with their #StopTheBans allies across the ocean by holding a protest in front of the U.S. Embassy Rome at 12-2 p.m.

#StopTheBans is being led by numerous advocacy groups including the ACLU, NARAL Pro-Choice America, and Women’s March. 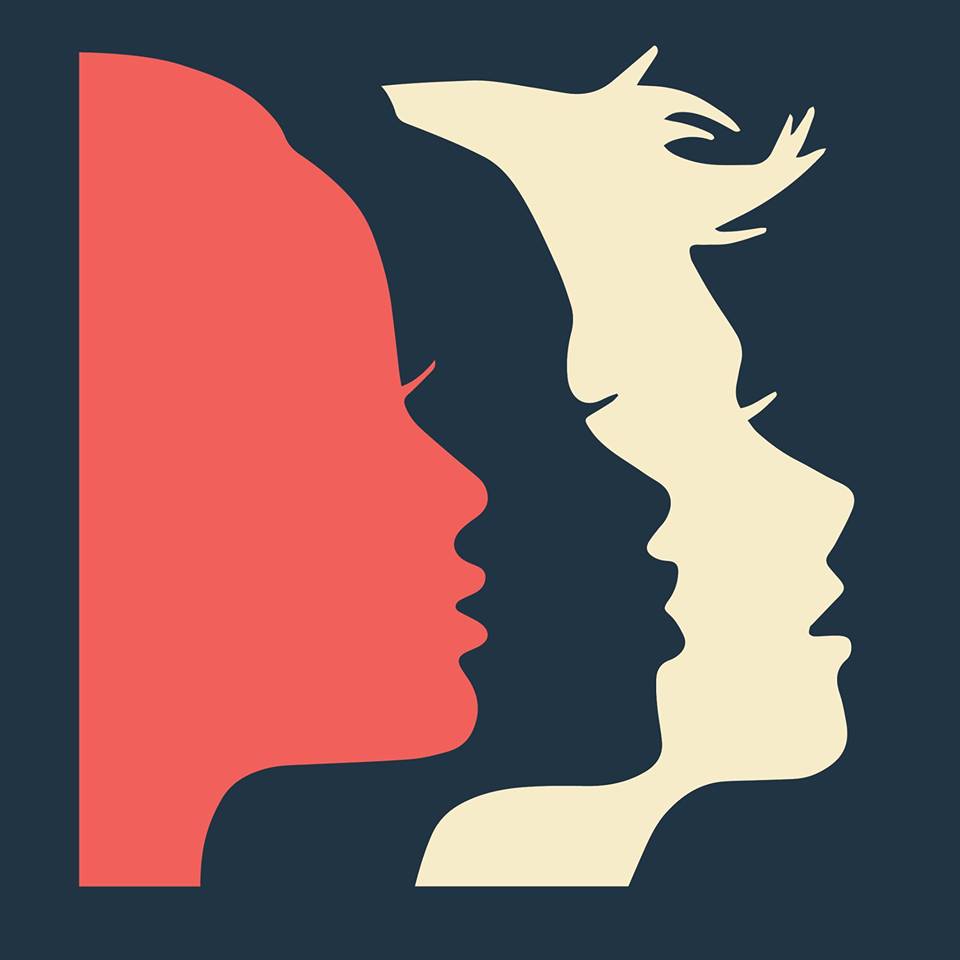 One year later, Americans and Italians in Rome come together to stand up for progress and equality.

On 20 January 2018, Americans and Italians in Rome will gather from 11:00 to 13:00 in Piazza Santi Apostoli to stand together in solidarity for the promotion and protection of civil and social rights, women's rights, and the environment. We will also decry the rise of nationalistic populism in the West and the present US Administration’s attacks on democratic institutions, and its politics of division and untruths. Equally important, we will voice our support of the #MeToo movement against sexual harassment and assault, and pledge to take our power to the voting booth this year (#PowerToThePolls).

The Women’s March Rome Anniversary, organized by individual American citizens in Italy, will take place during the #WeekendOfWomen. Hundreds of marches and rallies are being organized worldwide on 20 and 21 January as a grassroots reaction to the Trump Administration and its damaging policies to working class citizens, women, minority groups, immigrants, the military, the sick, the poor and the planet. They include the decision to withdraw the US from the Paris Climate Agreement, tax breaks that disproportionately favor corporations and wealthy class, and a belligerent and isolationist approach to international relations.

Several organizations of Americans in Italy will participate in the event, joined by Italian and international groups, to honor the champions of human rights, dignity, and justice in the spirit of democracy. At the time of this press release, the following organizations have announced their participation:

We are actively seeking the support of Italian organizations whose mission and goals intersect with ours.

Speakers and music groups will soon be announced.

See further details and sign-up on our Events page

This is the election to select new officers for the Rome chapter of Democrats Abroad Italy (Chair, Vice-Chair, Secretary, Treasurer).

Nominations are open, so please join us, whether you are interested in stepping forward to be on the Chapter Committee, or being there to be part of the selection process as well as voicing your priorities.

This is a great time to come on board as we gather our forces to be ready for the 2018 mid-term elections and voter registration.

To put your hat in the ring, please send an email to [email protected].  Matt Montavon, the outgoing chapter chair, and Gina Di Liegro, the outgoing vice-chair, will be the coordinators for the Rome chapter election.   And don't be shy - this is volunteer work and everyone respects that you have other priorities as well (work and family come to mind).

There is plenty of parking along Via Ostiense, and the venue is also just a short walk from the Garbatella Metro stop (linea B).   Just follow the signs from the main gate to the meeting room.

Refreshments will be provided.

We look forward to seeing you there!

Supporters of the Rome Chapter of Democrats Abroad

September 28 - one more chance to register to vote in Rome

To vote in November, Americans abroad MUST request an absentee ballot every election year. Even if you voted in the Global Primary here last March that did NOT register you to vote in the November elections!

Remember to bring your US drivers licence and/or passport, know your SSN and your complete voting residence address (where you last voted or lived in the USA).

Tomorrow, we will have representatives available to help you register. Stop by to make sure you registered so that your vote will count!

Already registered? Well, bring along a friend who hasn't yet, then enjoy a snack or drinks in a fantastic setting and discuss last night’s debate.