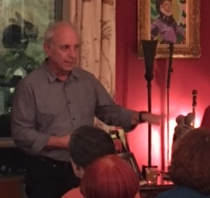 On October 28, Democrats Abroad France in partnership with Our Revolution France welcomed Larry Cohen to Paris.  Cohen is co-chair of the DNC's Unity Reform Commission (URC), and chairman of the board of Our Revolution. He reported on the URC's work, the proposals it will introduce, and their prospects to an audience of more than eighty people.

"Virginia voters: Have you sent in your absentee ballot for 2017? Now’s the time!" If you’re registered to vote in the Commonwealth, you may have gotten that very call from a DA volunteer.

Democrats Abroad is pleased to announce the publication of our 2017 Non-Resident Taxation Research report, “Can We Please Stop Paying Twice? – Reforming the U.S. Tax Code for Americans Abroad.”  The report provides data and testimony from Americans abroad on their experience filing from abroad and underscores the need for urgent reform to the tax code.   If you support tax reforms to exempt Americans living abroad from filing returns to declare income earned abroad then it is time to make your voice heard.

We refer you to the “Tax Reform For Americans Abroad Campaign in a Box”  and urge you to use it to tax action right away!  The time is NOW to call, email or write your members of Congress and the leaders serving on the Senate Finance Committee and House Ways & Means Committee, using the language in the Campaign, and ask for their support for Residency Based Taxation.

The tragedy in Las Vegas, the on-going suffering of those in hurricane-affected areas of the US and the president’s various taunts may have distracted you from what’s happening on Capitol Hill these last 2 weeks, but be assured that the GOP leaders of the Congress have been busy selling their tax plan and moving their budget resolution through critical votes.  In order to manage dissent in their caucus they have been slow-dripping details of the proposal.

The average American may be distracted from it but you can be certain that the legions of corporate lobbyists have been anything but absent during these critical days of budget and tax code horse-trading.

The tax policy wonks haven’t seen enough to proclaim it decisively, but they are saying that Congress has so far fallen short of the president’s demands that tax cuts focus on the middle class and not the wealthy.  (We’re shocked, right?)

We Americans abroad have a special set of concerns we’d like to lay in front of Congress whilst the details of the tax reform package have yet to crystallize.  We know from the approximately 4,500 responses to our survey of non-resident American taxpayers completed last month that there is enormous support for a radical change to the way the tax code treats non-resident taxpayers;  84% of respondents told us they support a switch from the current system of Citizenship-Based Taxation to Residency-Based Taxation (RBT) to resolve the many problems they are caused by a tax code that discriminates against them for being non-resident citizens.  As is explained in our RBT Frequently Asked Questions, under RBT Americans living outside the U.S. would continue to declare income generated in the U.S. but would be exempted from reporting to the Internal Revenue Service the income they generate in their country of residency.

If you are a supporter of RBT the time to take action is NOW.  Please open our Taxation Reform for Americans Abroad Campaign in a Box and use it to reach out to Congress TODAY!

Share the Campaign in a Box and the “Can We Please Stop Paying Twice?” report with your network of Americans abroad and encourage them to do the same.

Please forward your questions and comments to TaxationTF@democratsabroad.org.

“This morning, America woke to news of the worst mass shooting in our history. Our hearts are with the people of Las Vegas and all those affected by this despicable act of terror. In the coming days, we will surely learn of the heroism of ordinary Americans and selfless first responders who risked their lives to save others. We will be reminded that the courage of the American people will always outlast the cruelty of cowards. As Americans, we cannot give in to fear or hatred. We must be united against all those who perpetrate such terror, and do everything we can to ensure that vicious attacks like this become a thing of the past.”

"Democrats Abroad mourns the massacre victims from the Las Vegas shooting. They are our brothers and sisters, family and friends. We are shocked to the core by this horrible destruction caused by one man and his access to weapons designed solely for murder," stated Julia Bryan, International Chair of Democrats Abroad.

"We vow to join Perez's pledge and raise our voices to help ensure US citizens never suffer such an attack again. There is much that we can do to fight for sensible gun legislation, and there is no time like now to begin."

"The ‘Medicare-for-All’ bill is currently the best route to attaining the goal of universal healthcare and as such we endorse it." stated Julia Bryan, International Chair of Democrats Abroad, on behalf of the International Executive Committee of Democrats Abroad. "We invite those who favor other routes to put forward ideas that are as practical and thorough in attaining coverage for all.”

As Sanders explained in The New York Times Wednesday, the bill would mean that “every family in America would receive comprehensive coverage, and middle-class families would save thousands of dollars a year by eliminating their private insurance costs as we move to a publicly funded program.”

The endorsement from Democrats Abroad is the most recent push in support for Universal Healthcare from the organization, which has consistently maintained a stance that healthcare is a right, not a privilege. Americans around the world have advocated for an affordable healthcare solution for residents in the United States similar to what many have experienced first-hand overseas.

"We consistently hear stories of 'healthcare refugees' - Americans abroad who can't return to the States because their health care would be cost prohibitive back home," added Bryan. "Healthcare should be a given, not a question mark, and it's time for U.S. policies to reflect that."

Over the past few months, Democrats Abroad has taken on the DNC’s “Resistance Summer” campaign by organizing events to enroll new voters, activate our membership base and ready Americans around the world for the work ahead.

Americans Around the World Unite Against Hate

We call on Americans around the world to stand vigil tonight against the hatred of white supremacists, to show solidarity with Americans who believe we are, all of us, equal.

Yesterday, Trump announced his support for the RAISE Act, a bill calling for “merit based” immigration that rewards individuals who are affluent and already speak English before they arrive to America. Flanked by authors Tom Cotton (R-AR) and David Perdue (R-LA), Trump praised the bill, which is designed to cut legal immigration to the US in half within a decade.

If passed, the bill's impact would be widely felt among the Democrats Abroad community, effectively exiling many Americans abroad and their foreign citizen spouses and keeping them from returning to the United States.

As well, Democrats Abroad opposes elements of the bill which:

Democrats Abroad International Chair Julia Bryan notes, "America was not built on ethnic purity tests, and we will not stand for xenophobia thinly disguised as immigration reform. We trust that those opposing the bill — including Senators Lindsay Graham and John Thune — are genuine in their critique, and we implore both Democrats and Republicans to help put a stop to a bill that would write racism and classism into our laws."

While attention has been focused on the administration’s possible collusion with Russia in the 2016 general election, House Republicans have been busy delivering another nearly silent blow to democracy, as they seek to shut down the Election Assistance Commission.

Six Months in: Democrats Abroad under 45

On January 21 of this year, we stood in solidarity with the Women’s March in Washington DC, joining and hosting events from Japan to Ecuador, Germany to Australia, and everywhere in between. Today, we’re more fired up than ever, but what exactly have we been up to? Well, a lot…