Check Out Our Podcasts!

Have you heard? We've got podcasts! Give a listen to the latest episodes from our Global Black Caucus, Global Hispanic Caucus, and Democrats Abroad Mexico Country Committee. Then check out their caucus and country pages to learn more about joining, or offer your comments and ideas for the next episode.

Americans Abroad March for Family Reunification in the US 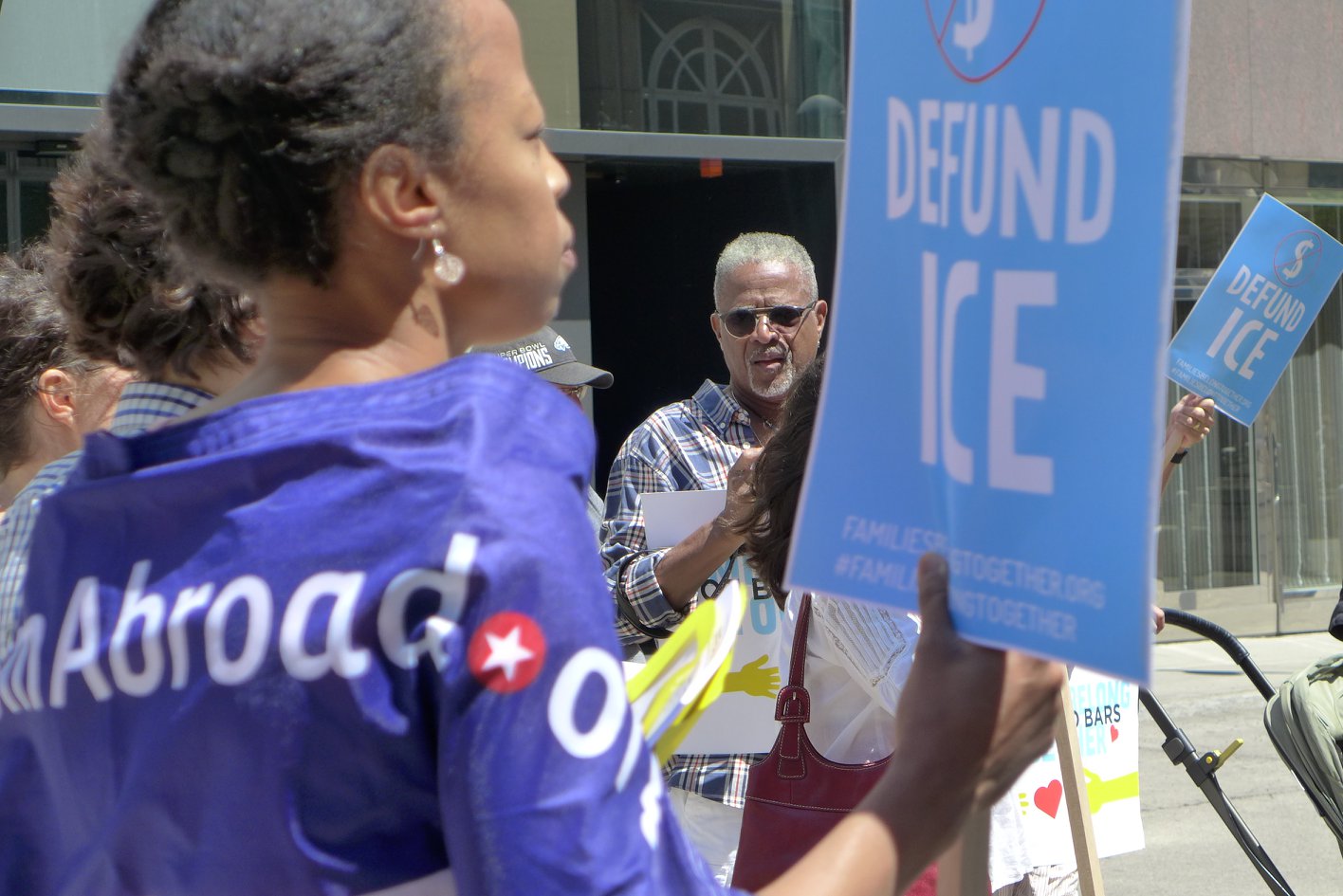 Democrats Abroad joined dozens of other groups this weekend to march in cities around the world, calling on legislators to ensure that there is a safe, expedited solution to reunify those families that have been separated and offers a reasonable solution for asylum seekers and immigrants. The organization, representing the 9 million overseas Americans, has held marches and rallies around the world on issues including gender equality and guns safety legislation, science and immigration.

Speaking on the issue, Democrats Abroad International Chair Julia Bryan explained, “As Americans abroad, we understand what it’s like to live between cultures and countries. And a great many of us live in countries that continue to wrestle with immigration issues of their own. But nowhere in the world is it acceptable to be separating or incarcerating families - indefinitely, at that. Our members, like Americans across the U.S. and our friends around the world, will not stand for this treatment. We’re speaking out because it’s right. Because we must.”

Ana Blackstad, Chair of the Democrats Abroad Hispanic Caucus added, “It’s no secret that Trump holds extremely bigoted beliefs when it comes to immigrants who play such a critical role in the United States and his own businesses. We've spoken out about his ongoing attempts to ban Muslim immigrants and target DACA recipients with harsh policies. But Trump crosses a different line entirely when he holds thousands of children hostage  for his wall. Families should not be incarcerated. Children should not be locked up.”

Recent events, including President Trump’s most recent executive order, have only exacerbated the concern over America’s immigration practices, suggesting the possibility of indefinite incarceration for families, no end to the practice of separating families, no plan to reunify the thousands already separated, in addition to the labeling of thousands fleeing for their lives as criminals rather than asylum seekers.

”This humanitarian crisis is one created entirely by the Trump administration and those in Congress who choose not to enact legislation that would override his directive.” added Bryan “These practices are entirely unjust, inhumane and unAmerican. They go against what we strive to be as a nation. And the Republican party has demonstrated that they have no qualms with supporting it. That’s why at our rallies we’ll also be encouraging Americans to register and request their ballots. Republicans in office have proven they can’t fix it. So we will. It’s time to vote them out.” 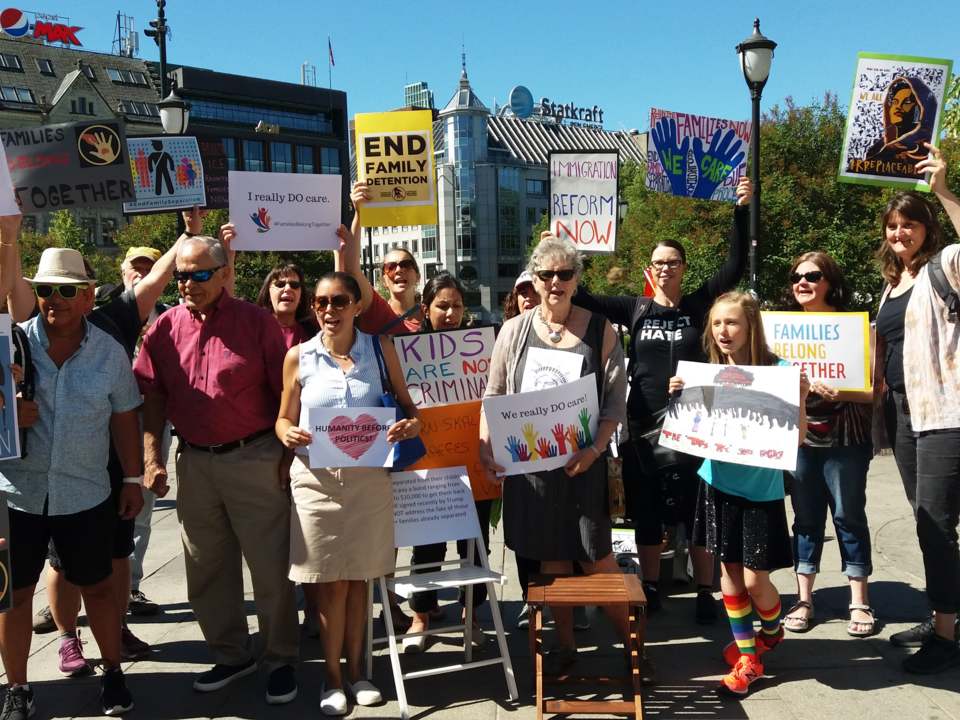 Democrats Abroad condemns the Supreme Court's decision to allow Ohio to purge their voter rolls. This is a dangerous precedent, and it is clear that it will be used by other red states to discourage voter turnout back home.

American abroad voters will also be affected. Please be aware that your registration could also be removed from your state’s list of active voters. Voter roll purges are happening in other states, and we expect this ruling will lead to an increase in the future.

What you can do to make sure you can vote this year:

1. Go to votefromabroad.org and fill out, print, sign and then send in your ballot request to your local election office back in the US. We suggest emailing in your request as the fastest and safest method for making sure your form is delivered.

2. After you have sent in your request, get in touch with your local election office and confirm that you are registered. (Any problems, please get in touch at [email protected]).

What you can do to make sure others can vote this year:

The Republicans are using lots of different suppression tactics to keep people from voting both in the US and abroad - purging voter rolls, spreading disinformation, closing polling centers and more. Here's information on how you can help fight the spread of misinformation to voters abroad.

On Memorial Day, Democrats Abroad remembers, lest we ever forget, the sacrifice of our soldiers and American families. As part of this, Dems Abroad members joined other Americans around the world to take a moment to recognize their sacrifice.

The first votes of the 2018 AGM brought cheers around the room and even online, as we voted unanimously to admit our three newest country committees. Congratulations to Democrats Abroad members in Haiti, Nicaragua and Romania!

Konichiwa! 2018 AGM Kicks Off in Tokyo

As Democrats Abroad leaders and members arrived in Tokyo - the home for our annual global meeting for the very first time - our hosts of the local Democrats Abroad Tokyo chapter welcomed us with true hospitality, including small, hand-made welcome gifts to each attendee.

DA Statement on the 2020 Census

Re: U.S. Citizenship Question on 2020 Census

Thank you for holding today’s hearing on the 2020 census briefing. I appreciate having the opportunity to share with the Committee the collective voices of many of your constituents.

As the International Chair of Democrats Abroad, I write today with the American overseas community’s perspective in regard to the Administration’s desire to include asking for respondents’ citizenship status on the upcoming census. As you may know, Democrats Abroad is the official branch of the Democratic National Committee for the millions of U.S. citizens living outside of America’s borders and territories. We closely follow the actions in Congress from abroad and advise our members to take action as appropriate.

In addition to nineteen states’ attorneys general[1] and six former Census Bureau directors[2], I offer our perspective of strong opposition to the Department of Commerce’s unnecessarily enquiry about U.S. citizenship. Article I, Section 2 of the U.S. Constitution explicitly states the need for the federal government to enumerate the citizenry. In no constitutional clause does it state, suggest, or imply that requesting U.S. citizenship status should be part of this decennial process. The Census Bureau rightly halted this practice in 1950 and to bring it back would be disastrous in 21st-century America. Virtually all interested parties want the 2020 census to be accurate, without fear, and robustly funded by Congress. However, if the subject of citizenship is added, it is likely that this traditionally non-partisan project will be met with fear, hostility, questionable results, and other undesirable outcomes.

We believe the Administration is unnecessarily creating opportunities for inaccurate or incomplete census information of your constituents by gravely miscalculating a political move instead of administering sound constitutional policy. Moving to a controversial, citizenship-based census questionnaire is not only preventable but greatly risks the quality of census data to be collected because of the millions of U.S. resident non-citizens - green card holders, refugees, “dreamers,” and many others - who may hesitate to complete the census form due to its overreaching inquiry on citizenship status. By doing so, it would skew the actual population numbers intended for legislative representation, and clearly lead to a misdirected distribution of finite economic resources as appropriated by Congress.

If the Committee does move legislation forward relating to the 2020 Census, Democrats Abroad strongly urges for inclusion of legislative language mandating the enumeration of all federally-unaffiliated U.S. citizens living abroad. Democrats Abroad - along with several other interest groups representing expatriate interests - has testified numerous times before Congress over the years calling for our rightful inclusion in the census. Unfortunately, we remain disenfranchised. In light of this continued injustice, a congressional hearing on the estimated nine million Americans living abroad and how to best include them in the 2020 census is needed far more than determining whether a U.S. household is occupied by citizens or immigrants.

Again, thank you for the opportunity to be heard on this matter. I respectfully request for this statement to be included into the hearing record, and note that I am readily available via phone or e-mail for any follow-up questions or comments from the Committee. I can be reached at (843) 628-2280 or [email protected]

DNC Chair Tom Perez provided a rallying and soulful talk to Democrats in London on April 26th, highlighting the party’s successes in candidate recruitment and victories in recent congressional, state and local elections.  Summarising the DNC’s actions since the 2016 presidential elections, Perez addressed some hard truths and sketched out a battle plan to re-establish a government that reflected Democratic values.

“Our democracy is on fire!” Perez said. Basic principles, like the independence of the Justice Department and the right to vote, are being attacked by our own government. Free and fair elections are under threat from foreign manipulation. “Even the way the DNC itself operated has been flawed,” he said, referring to candidate favouritism in 2016.

“One way that we as Democrats have failed is that we only had a 4 year innovation plan. We worked on coming up with new ideas, new solutions every 4 years to get a president elected. If you’re a business and you’re not innovating every 8 months, you’re in big trouble. The new Democratic Party is addressing that,” he said. “We have a 57 state strategy to organise, recruit and communicate in all states, not just in traditionally blue states. We’re going into red districts, listening to voters, and winning!”

“We didn’t get the support we needed in 2016 in some key places because voters lost trust in the Democratic party. The DNC is working to rebuild that trust and to deliver the change that millennials and all of us want to see,” Perez said. “We’re all millennials. We care about healthcare  and employment and pensions. We’re concerned about and addressing income inequality and the needs of our most vulnerable citizens.”

“We’re all millennials, no matter what age you are, because you’re all building a bridge to a better Democratic party and a better country.  We’re all part of the transformation of the Democratic Party.”

March for Our Lives - Enough is Enough Virtual March

Hundreds of Americans abroad posted their virtual march pictures to us this weekend - standing with the many thousands who marches in cities and towns around the world. Thank you for your outreach! And if you didn't get to march last weekend, it's not too late to join our virtual march - head here for information and the pdf printout. 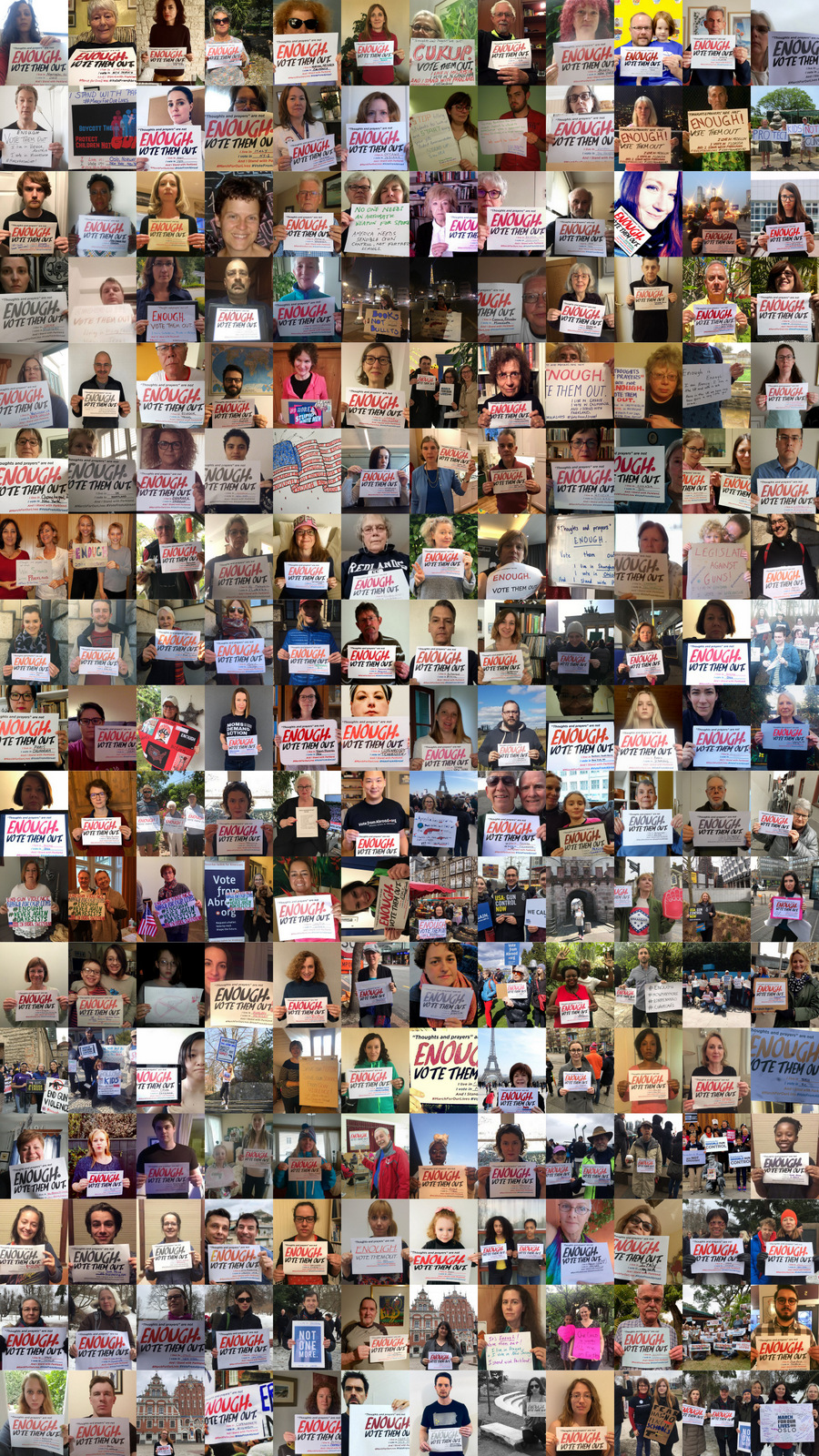