Tiny Action: A Valentine That Shall Not Be Denied or Abridged on Account of Sex 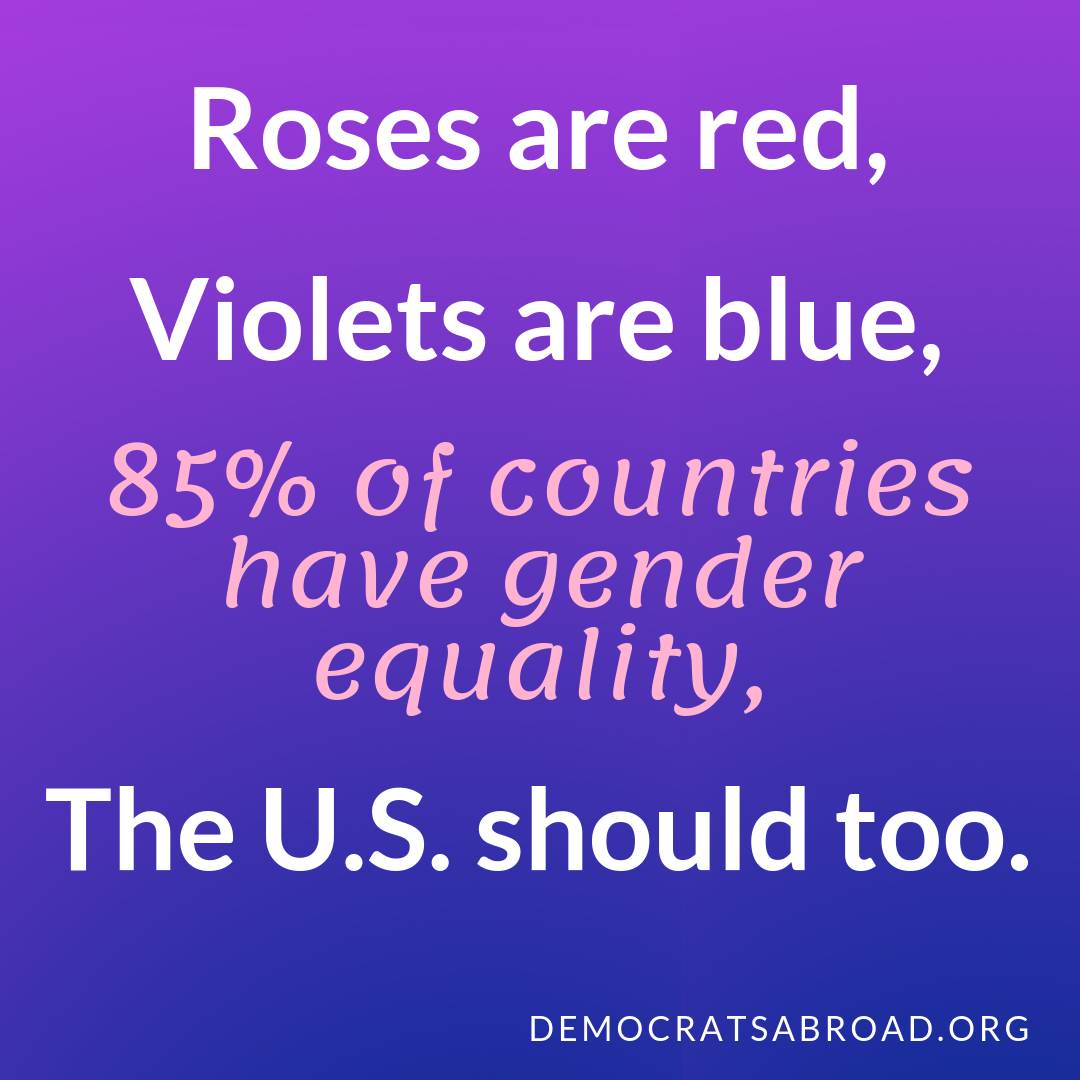 Democrats Abroad has been fighting hard to help ratify the Equal Rights Amendment, enshrining into the US Constitution that “equality of rights under U.S law must not be denied or abridged on account of sex.”

We’re not alone. Americans across the country who are joining in renewed efforts to ratify the ERA across the country. But because of this momentum, Republican leaders are fighting to hold us back, through stonewalling state legislatures and launching campaigns of false and misleading information. They’re doing this despite the fact that the vast majority of Democrats and Republicans support ratifying the ERA.

This week’s Tiny Action: Tell our elected leaders - and the rest of the world - that the time to ratify the Equal Rights Amendment is NOW. 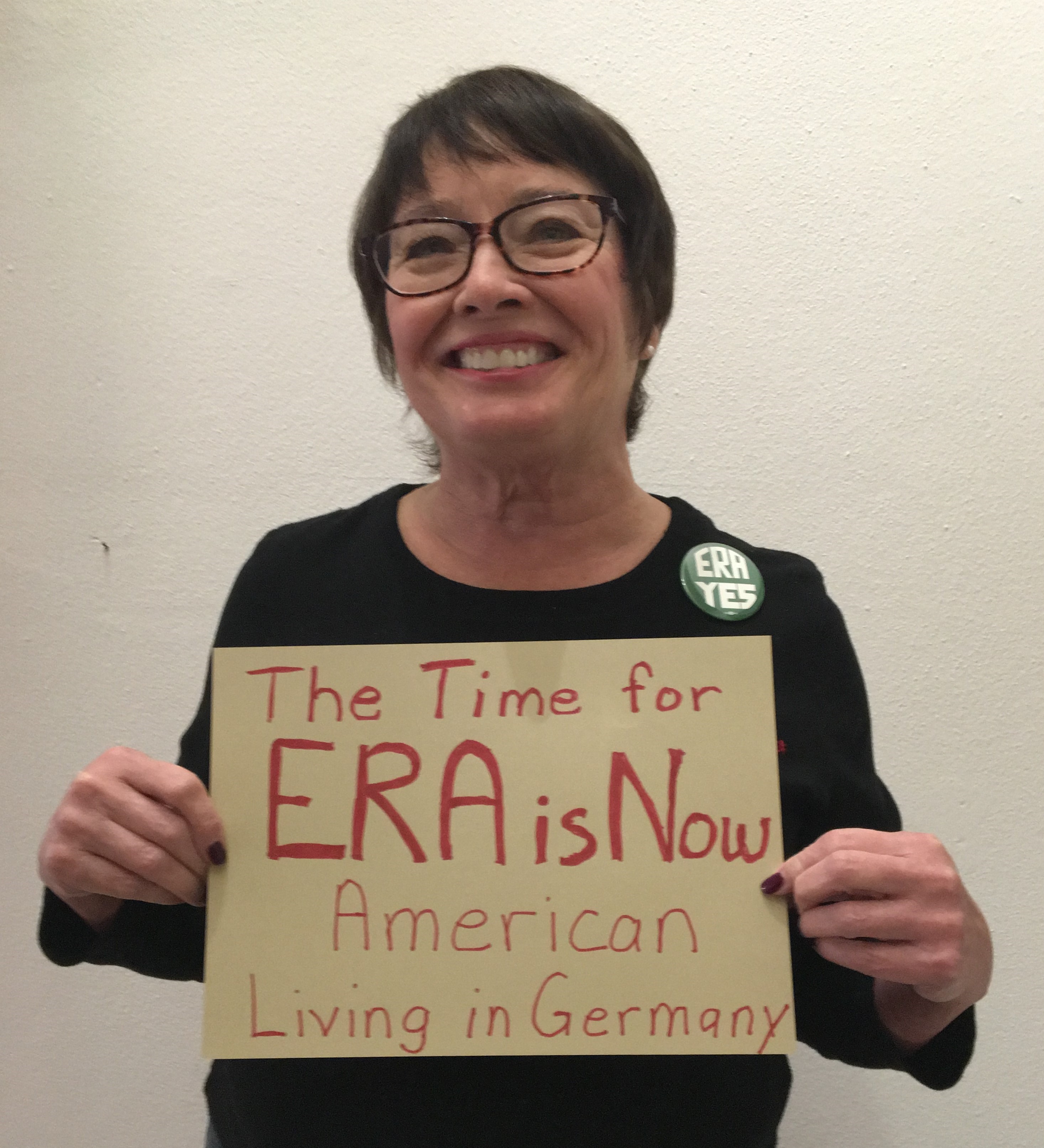 Thanks to our Global Women's Caucus for creating a range of ways you can offer your support, from wherever you are.

1. Tell your Representative and your Senators to enshrine equal rights into the constitution.

Hi my name is [NAME]. I’m a voter from [CITY, STATE], but I currently live in [LOCATION]. I am [calling/writing] to implore you to support [S.J.Res.6 / H.R.Res.38], to amend the Constitution so that equality of rights under the law shall not be denied or abridged by the United States or by any State on account of sex.

As an American living and voting from overseas, I am troubled by the fact that 85% of the world's countries have gender equality written into them, and yet ours does not. While many may assume our constitution mentions this, I know that it does not. And I know that even Justice Scalia once pointed out that equal rights are not guaranteed by our constitution. It is not enough to assume these rights exist. We must make it so.Thanks for your time.

You can also call or even send postcards. Even if you do not vote in these states, you can still voice your support.

3. Download and print this petition form to help us collect signatures.

Ask Americans (and only Americans) to sign our petition endorsing the Equal Rights Amendment. Once you have your signatures, send a scan or very clear photo of all pages to ERA@democratsabroad.org. We will send these to state legislature leaders to show our support.

Create a sign and take a photo in support. Include that you are an American and note where you live. Post on social media and share with us! Find more details, hashtags and guidance here.

Want to make an even BIGGER impact? Post and send a short 45 second video. Check out tips and a sample vid here.

Get a group together to watch this 30 minute documentary about the Equal Rights Amendment and why it's critical that we ratify it now, or watch on your own. You'll need to RSVP at the link to get free access to watch from anywhere.

If you are voter in one of the states listed above or a former resident, write a letter to the editor of your local newspaper to solicit local awareness and support in the states where the ERA has still not been ratified (listed above).

You can find out how to submit your letter on the newspaper's website. Here is the SF Chronicle submission page, for example.

Try to keep your comments as non-partisan as possible, and use your letter to call upon citizens and state legislatures to support the ERA. Briefly share your unique perspective as a former resident of [city] now living in [country]. Consider including:

- 85% of all nations have equal rights in their constitutions. Include a comment about where you currently live.
- Women need protection under the constitution since laws supporting equal rights can be changed
- If you are not a woman, explain why you still support the ERA. Try to keep your comments as non-partisan as possible

WHY THE EQUAL RIGHTS AMENDMENT MATTERS

We're targeting 13 states in particular because the ERA needs to be ratified by just one more state - lucky 38! - in order for it to become law. However, we expect there will be legal debate as to whether too much time has passed since it passed in the Senate in 1972. That's why we need our elected leaders at a national level to support the ERA, too.

There has been renewed interest in passing the ERA, thanks to #MeToo, the Women's March, the rise of activism across the country, and with more women and Democrats being elected into office.

Although the ERA is supported by the vast majority of Americans - including Republicans - hard conservatives are launching a full-on campaign against it, full of false information and misleading messages. We need to tell them we will not be fooled.

Receive our actions each week by signing up on the Tiny Actions page. If you don't see the Subscribe button, you'll need to sign in first. Be sure to forward and share with other activists, too.

As always, our aim is to turn tiny actions into big results, so we hope we can continue to count on your help! Please send suggestions for our next tiny action to info at democratsabroad dot org.