A love letter to Ruth, and a call to action 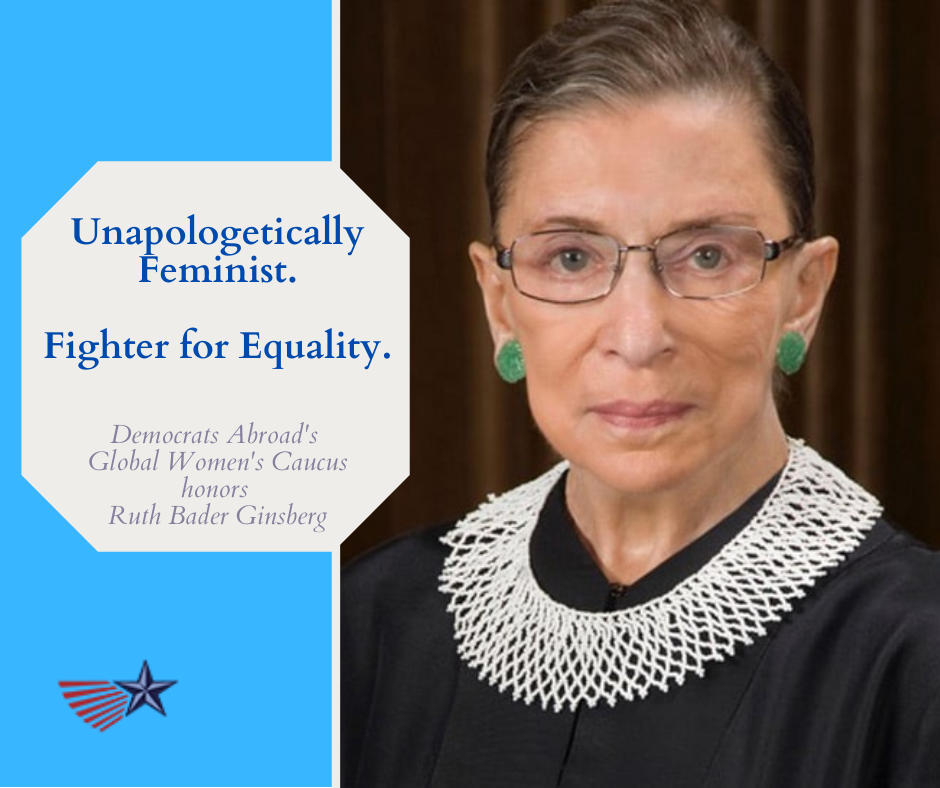 It is with a heavy heart and teary eyes that I write of the passing of the foremost American lawyer,supporter and guiding light for women’s rights, Supreme Court Justice Ruth Bader Ginsburg.

There is not a woman in the United States, regardless of her politics, whose life, career and security has not been defended and supported by the work of Justice Ruth Bader Ginsburg.

We are all in her debt, young and old, Democrat or Republican.

Justice Ginsburg's life is a story of perseverance, brilliance and dedication. The indignities she endured as woman lawyer are still present in our fight for equality today, despite her heroic, continued and consistent fight against such indignities and inequalities

I cannot speak about her passing and how  tragic it is in  so many ways without quoting our beloved President Obama who said most eloquently:

“Over a long career on both sides of the bench -- as a relentless litigator and an incisive jurist -- Justice Ginsburg helped us see that discrimination on the basis of sex isn't about an abstract ideal of equality; that it doesn't only harm women; that it has real consequences for all of us. It's about who we are -- and who we can be,"

"Ruth Bader Ginsburg fought to the end, through her cancer, with unwavering faith in our democracy and its ideals. That's how we remember her. But she also left instructions for how she wanted her legacy to be honored. Four and a half years ago, when Republicans refused to hold a hearing or an up-or-down vote on Merrick Garland, they invented the principle that the Senate shouldn't fill an open seat on the Supreme Court before a new president was sworn in.

A basic principle of the law -- and of everyday fairness -- is that we apply rules with consistency, and not based on what's convenient or advantageous in the moment."

And from the Chief Justice Roberts himself:

"Our Nation has lost a jurist of historic stature. We at the Supreme Court have lost a cherished colleague. Today we mourn, but with confidence that future generations will remember Ruth Bader Ginsburg as we knew her -- a tireless and resolute champion of justice."

Justice Ginsburg spoke often about the discrimination she faced herself when she graduated from law school in 1959 and could not find a clerkship. I have been present for many of her speeches and have met her personally at the Supreme Court.

She was amused by the swag that appeared praising her work, including a "You Can't have the Truth, Without Ruth».

What can and should we do without her presence? Where can we find hope to carry us through these dark days?

"It makes absolute sense that Justice Ginsburg has become an idol for younger generations," Justice Elena Kagan said at an event at the New York Bar Association in 2014. "Her impact on America and American law has been extraordinary."

"As a litigator and then as a judge, she changed the face of American anti-discrimination law," Kagan said. "She can take credit for making the law of this country work for women and in doing so she made possible my own career."

Let us remember with lucidity  her dying wish:

"My most fervent wish is that I will not be replaced until a new president is installed."

Justice Ginsburg, even after her fifth diagnosis of cancer, was working on a book with one of her former clerks, Amanda Tyler, based on her life on gender equality  (to be published in 2021).

In our fight for gender equality and specifically for the ERA, let us remember all she did for us, American women, and carry on her fight for equality. We will never forget you, Ruth, and we will carry on your fight starting with the politic fight now created by Mitch McDonnell to erase all you have done by trying to force through your replacement.

Ruth may have left this world, but she left it with fighting words and her legacy as a determined femninist. We owe it to Ruth to continue the fight.