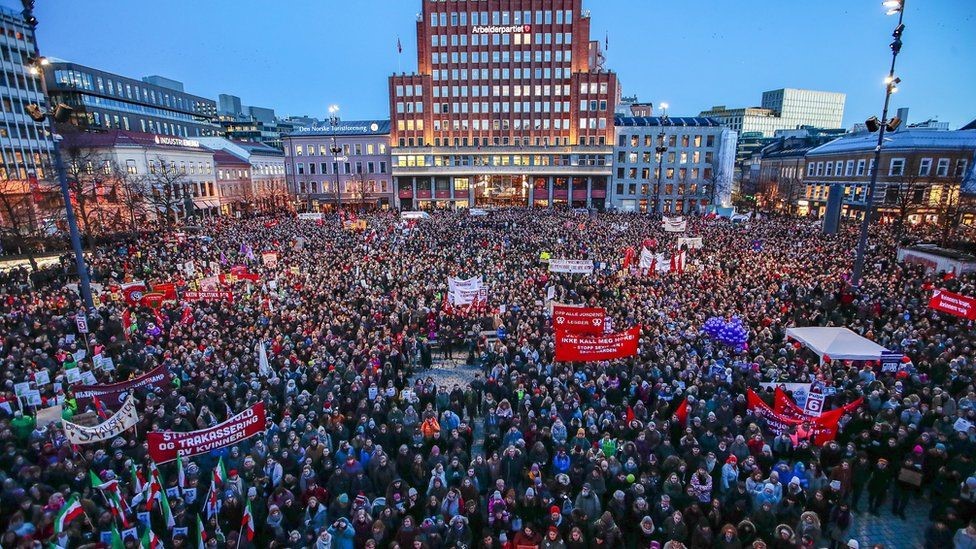 While Norway also has a Safe House for abused men, women are still subject to abuse in the home and harassment in the workplace. Abortion laws have also been under pressure. So, even with all the backing of the law, attitudes, actions and personal choices can seem to be more difficult to change. There have been many studies and reports about the gender paradox of gender equality in Norway*2. So, even women here, have reason to march for equality for themselves and women globally.

The main emphasis of this year’s march was about abortion rights and equal pay.

Self-determined abortion is the law until 12 weeks. But many find it disturbing that the abortion law is being drawn in different directions and threatened, and there is a desire to remove the so-called “councils”, usually physicians, that can determine a women’s right to have an abortion after 12 weeks to 18 weeks. There were demands and chanting “No to Councils” at the march.

On the International Women’s Day in Norway, there were arrangements from 8am until 9pm. In many parts of this nation. Here are some of the highlights from Oslo:

There were many speakers, music, entertainment and many signs and slogans.

Women dressed in “Handmaiden” frocks demonstrated in front of the Kings castle prior to March 8th  against any possible government interference in womens abortion rigths.

The US Ambassador Kenneth J. Braithwaite, a moderate Republican, honored March 8, by gathering the U.S. Embassy Oslo community to celebrate and appreciate the many contributions women make to our Embassy mission, the U.S.-Norwegian relationship, and beyond.