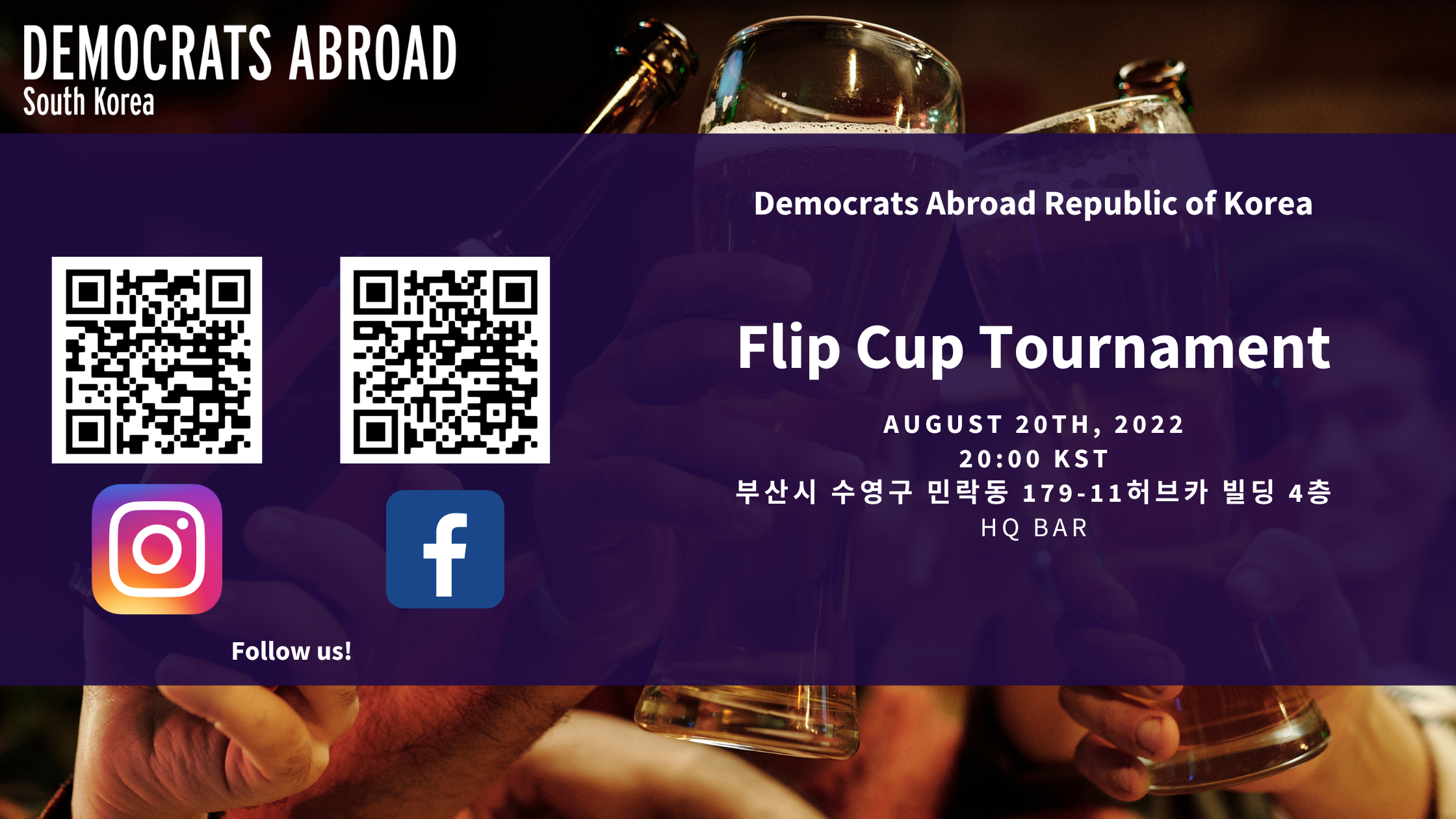 We're having a flip cup tournament and helping new and current Busan people meet various groups in the city. This event is brought to you by Democrats Abroad (https://www.democratsabroad.org/kr) a non-partisan group that helps Americans vote from abroad. On this night we will have people to help you register to vote and get involved with this year's election. We'll also have representatives from other social groups so you can meet people and find fun things to do.
What is flip cup?

It's an American drinking game played with red plastics cups. after you drink a swallow of beer you put the cup bottom down on the edge of a table and hit it so it flips and lands on it's top. you do this as a team and it's a relay race to the last person drinking and flipping their cup.
Tournament Set Up:

each team will start drinking at the same time. the goal is to have each person drink then flip their cup. first to finish wins. It's a double elimination tournament, so after your team's second loss you're eliminated. the winning team is the last team standing.
Location:
This will be held at HQ bar in Busan. you can get to HQ by going toward Gwangan Beach from Gwangan station until you get to the road parallel to the beach. there you will turn left and look up to see the bar of the fourth floor of a building.
http://kko.to/vYGMQmHa2
Notes
- for those who don't drink beer or alcohol, Chilsung Cider will be provided.
- this game is super easy to learn and provides a good way to be social.
- if you want to come and just hang out, please do!
What groups will be there?Democrats Abroad https://www.democratsabroad.org/our_party
We strive to provide Americans abroad a Democratic voice in our government and elect Democratic candidates by mobilizing the overseas vote. We have just for a chapter here in Busan and we're looking to help people vote from here and expand our political activities. We organize social events to share our love of politics. While Democrats Abroad is the official Democratic Party arm for the millions of Americans living outside the United States, our main focus on voting is non-partisan.
WHEN
August 20, 2022 at 7:00am - 10am Seoul Time
WHERE
HQ Bar
237 Gwanganhaebyeon-ro Suyeong-gu Busan
Busan, Gyeonsangnam-do 48284
South Korea
Google map and directions