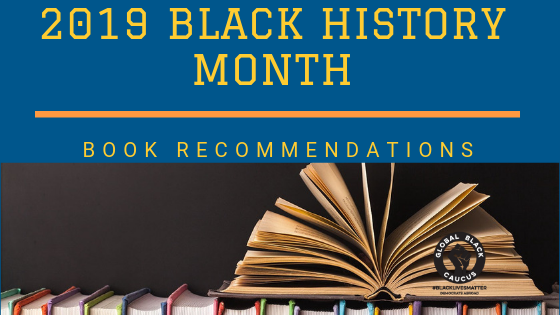 Every traveler knows that a book can be your best friend, your guide, and your sanity-saver. Living abroad, even more so than a pleasant jaunt away from home, can be as challenging and scary as it is exhilarating. And books often help the globetrotter step back, recharge, learn something new in order to plan the next adventure or simply appreciate the adventure they are already on. A good book, fiction or nonfiction, can also teach a traveler or expat the history or culture of the place they now call home.

In this spirit of adventure, this quarter’s Global Black Caucus booklist is comprised of old and new gems---fiction and nonfiction that take us from Hawaii to Mississippi and beyond. We hope these books will inspire, confound, and perhaps help you plan your next escapade. We invite you to turn the page!

The Half Has Never Been Told: Slavery and the Making of American Capitalism

An Associate Professor of History at Cornell University, Baptist uses all his persuasive research and writing skills to challenge the myth that the enslaved labor of Africans and the American Negro did not fundamentally create the United States of America as we know it today.

At times charming but mostly enraging, The Half Has Never Been Told takes on the myth, manufactured during and post-antebellum, that American slavery was somehow isolated from the social and economic formation of the United States. Baptist convincingly argues that enslaving an entire people and using their forced labor was essential to the economic prosperity of the fledgling country, the hinge which allowed it to become an economic and cultural powerhouse in a breathtakingly short amount of time and not, as slave owners, businessmen, politicians, historians, and everyday people proffered, simply a by-blow at best and incidental at worse.

The Bone and Sinew of the Land: America’s Forgotten Black Pioneers and the Struggle for Equality

The Bone and Sinew of the Land is a truly original story of how the West was won. In 1818, the wife and husband Keziah and Charles Grier and other Black settlers cultivated land in Indian before the state was even a state. And as they turned the soil, planted crops, built dwellings, and grew their families, they helped fleeing slaves and fought for racial equality decades before the Civil War.

Published in 1971, Duberman’s biography on the legendary athlete, lawyer, singer, actor, and activist is considered the baseline from which to begin exploring Robeson’s extraordinary life.

The Warmth of Other Suns: The Epic Story of America's Great Migration

Just as James Baldwin’s The Price of The Ticket should be required reading by all Americans and those who aspire to the American Dream, so too, should The Warmth of Other Suns (THOS). This National Book Critics Circle Award-winning book is a gift, a gift which haunts and sticks with you long after you put it down. TWOS deploys the life stories of three very different Americans to tell the tale of Black migration out of the south between 1915-1970. Sharecropper Ida Mae Brandon Gladney heads to Chicago in the 1930s. George Swanson Starling, a Florida orange picker, makes his way to New York in the 1940s, and Robert Joseph Pershing Foster, a doctor who left Louisiana in the 1950s, moved to Los Angeles. All three suffer and triumph as they staked their claim to their country.

An American Marriage: A Novel

Jones’s award-winning novel is devastating. With a poet’s lyrism and a novelist’s realism, she takes us through an African American couple’s marriage destroyed by fear, racism, and reality.

Dreams of My Father

Some people’s Forever First Lady smashes records, egos, and a few cherished myths about racism and perfect marriages in her first book.

This groundbreaking, heartbreaking book lays bare the false idea of Black people’s innate criminality. With terrifying facts and figures, Alexander shows us how the United States became the country which locks up more of its citizens than any other and the destruction it unleashes on the survivors.

Named by The New York Times as one of the 10 Best Books of 2017, SUS introduces us to Jojo, his fractured family, and the fictional town of Bois Sauvage, Mississippi on Jojo’s thirteenth birthday. Ward uses Magic Realism to explore the boy’s coming of age, his connection to his beloved grandfather and feckless mother, and the painful history of his country.

Just Lucky I Guess: A Memoir of Sorts

A Broadway and film powerhouse, Channing’s 2007 memoir offers a delightful and funny look at her life on and off stage. She dishes on famous colleagues and the little-known fact that a paternal grandparent was African American. Strap in, it’s going to be a bumpy ride!

Early in the twentieth century, the black community in Tulsa- the "Greenwood District"- became a nationally renowned entrepreneurial center. Frequently referred to as "The Black Wall Street of America," the Greenwood District attracted pioneers from all over America who sought new opportunities and fresh challenges. Legal segregation forced blacks to do business among themselves. The Greenwood district prospered as dollars circulated within the black community. But fear and jealousy swelled in the greater Tulsa community. The alleged assault of a white woman by a black man triggered unprecedented civil unrest. The worst riot in American history, the Tulsa Race Riot pf 1921 destroyed people, property, hopes, and dreams. Hundreds of people died or were injured. Property damage ran into the millions. The Greenwood District burned to the ground. Ever courageous, the Greenwood District pioneers rebuilt and better than ever. By 1942, some 242 businesses called the Greenwood district home. Having experienced a decline in the '60s, '70s, and early '80s, the area is now poised for yet another renaissance. Black Wall Street speaks to the triumph of the human spirit.