One of our members is organizing a virtual event focused on how we can reinstate U.S. leadership in pandemic preparedness and response, building on lessons we’re currently learning from COVID-19 and those we learned from Ebola and Zika.

Please join
Peggy Hamburg
Former Commissioner of the U.S. Food and Drug Administration
Nicki Lurie
Former Assistant Secretary for Preparedness and Response at the U.S. Department of Health and Human Services
and
Lisa Monaco
Former Homeland Security Advisor to President Barack Obama
for a
Virtual Discussion on Tomorrow's Coronavirus: Reinstating U.S. Leadership in
Pandemic Preparedness and Response,
moderated by John Monahan,
Former Counselor to the Secretary at the U.S. Department of Health and Human Services
Friday, October 2, 2020
4:00 p.m. EDT / 1:00 p.m. PDT
(10:00 p.m. CEST)
Note that this event is a fundraiser for the Biden/Harris campaign. It is not organized or sponsored by Democrats Abroad Switzerland, but we are sharing this information because we believe it to be of interest of our members.

Our friends at Action Together: Zurich, CH have put together this informative event and fundraiser to benefit Stacey Abrams' Fair Fight. 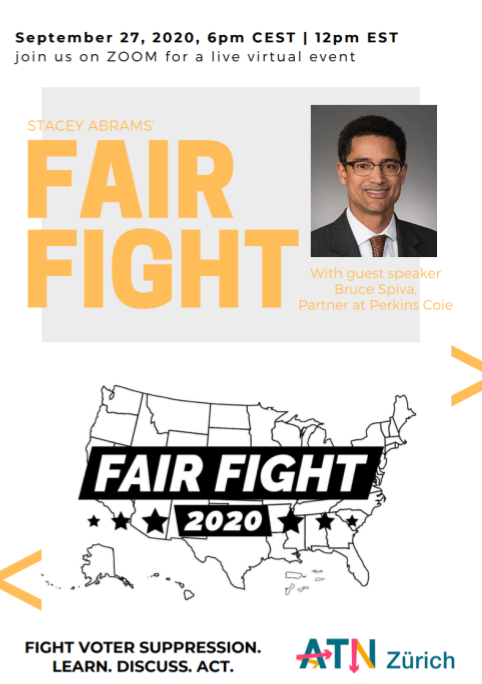 Prior to the meeting, feel free to learn more about the issue in any of the following ways:

You can RSVP to this event on Eventbrite. Admission to the event is free, but ATZ would appreciate it if you made a donation to their fundraiser benefiting Fair Fight.

Note that this event is not organized or sponsored by Democrats Abroad Switzerland, but we are sharing the information because we believe it may be of interest to our members.

Our good friends at Action Together: Zürich have put together this amazing video featuring our favorite voter registration tool, Vote From Abroad!

Check out the video, check out their site, and be sure to #passthevote! 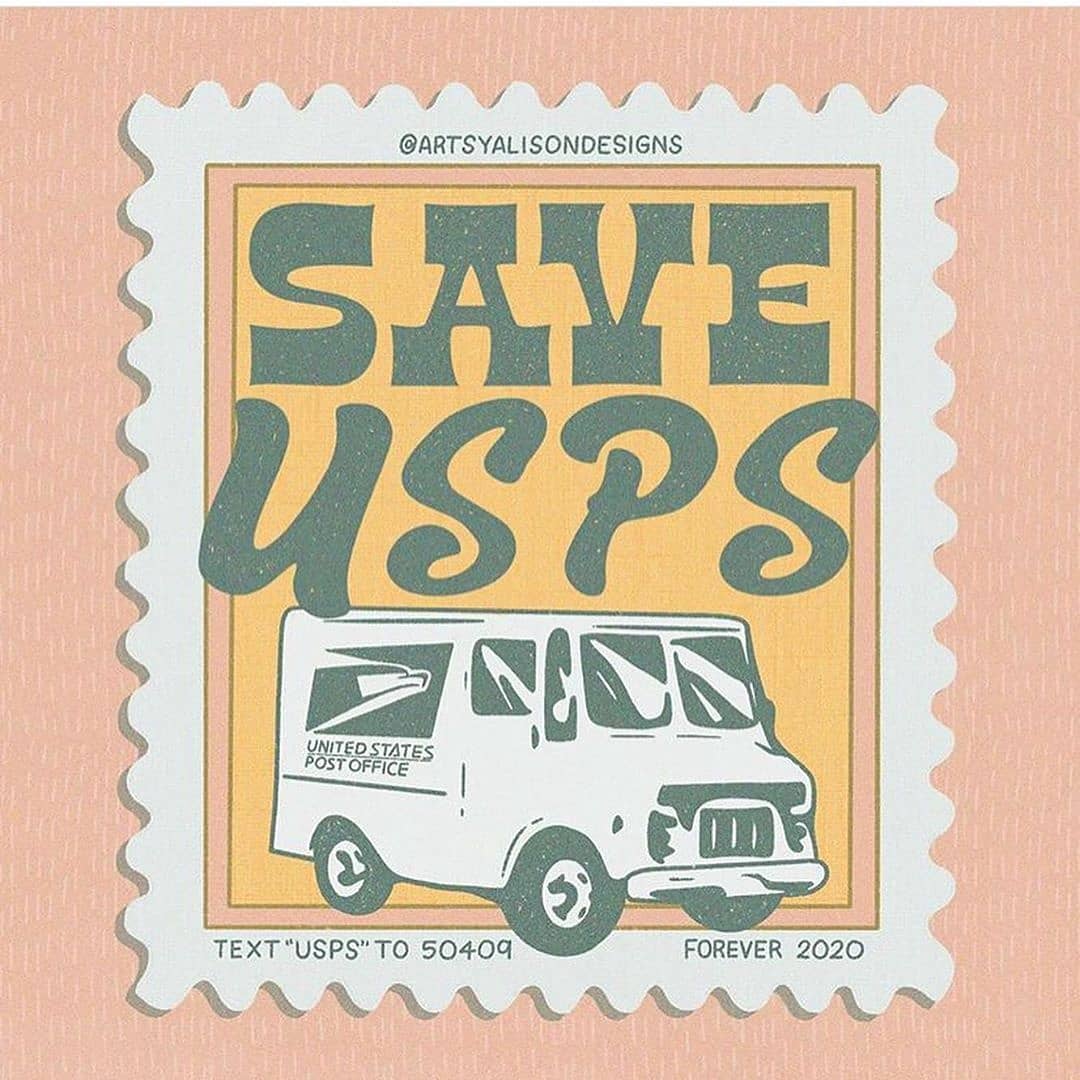 The United States Postal Service (USPS) is an independent agency of the executive branch and is responsible for providing postal service in the US, insular areas, and associated states. It is one of the few government agencies explicitly authorized by the US Constitution (Article 1, Section 8, Clause 7).

The USPS employs 633,188 workers, which makes it the 3rd largest civilian employer in the US. They are legally obligated to serve all Americans, regardless of geography, at uniform price and quality. The USPS is the world's largest postal system by both geography and volume, delivering 47% of the world's mail.

Those of us living outside of the US know how important the USPS is. In addition to using it to vote each and every year, we also depend on it to send and receive packages and letters to all of our loved ones back in the US. This year, in light of the ongoing pandemic running unchecked throughout the US, those loved ones need the USPS to be operating at full speed and capacity so that they can reliably and safely vote by mail, just like we do.

DA is opposed to all forms of voter suppression and we think it is absolutely imperative that our members do all that they can to support the USPS and protect it from this blatant attack by the current administration. Please read through this linked page from the American Postal Workers Union and take as many of the suggestions as you can.

You can also email the USPS Board of Governors to express your displeasure with Postmaster General Louis DeJoy. Templates for letters/emails can be found here.

Don't Stop with Your Own Ballot; Help Register a Friend!

After you have followed these three easy steps, pay it forward and help your friends, family, and colleagues who are eligible to vote in the election, register as well!

Democrats Abroad sets up Voter Registration events all over the world to help overseas voters make sure they will get their ballots and VOTE!

Overseas voters need to send in their Federal Post Card Application (FPCA) form to request their ballot every calendar year in which they wish to vote. Our website, www.votefromabroad.org, makes it easy for overseas voters to fill in and submit their form.

To volunteer at a Democrats Abroad Voter Registration event near you, please contact your local chapter of Democrats Abroad. Go to: www.democratsabroad.org and click on "Countries" for contact information; or email us at: [email protected].

These training materials will provide the background you'll need to volunteer at a voter registration event and help your friends, family, and other overseas voters register to vote and request their ballots. (For your convenience, the training materials are offered either in a training deck OR video format):

Request Your Ballot and be Prepared to Vote 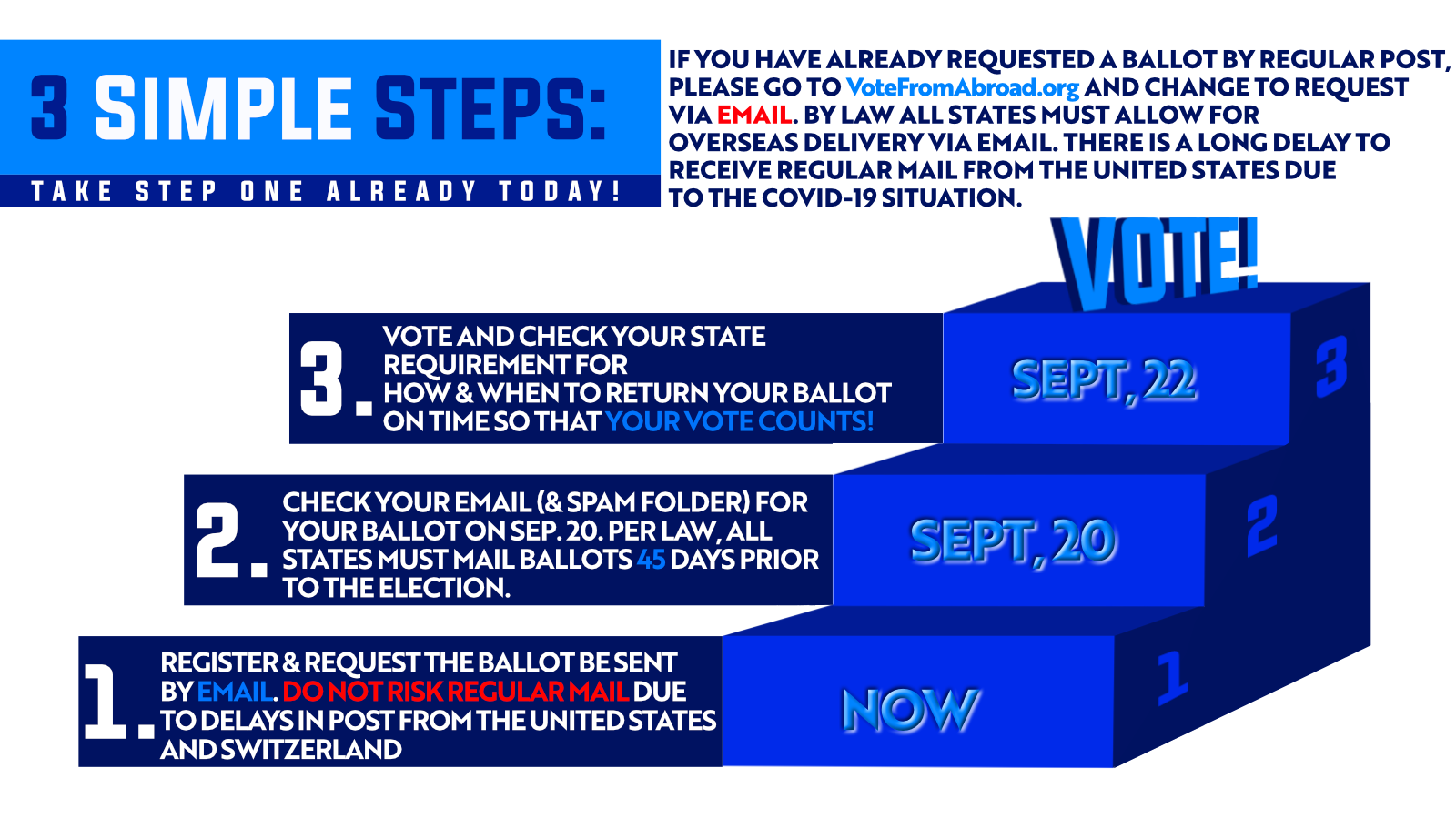 Step 1:
If you have not already registered and/or requested your ballot from your Local Election Office, please go to VoteFromAbroad.org and do so now, and please request to receive your ballot via email! This is vital. Local Election Offices (LEO) in the USA are swamped with requests and therefore they may need extra time this year to process your request. Plus, receiving mail in Switzerland from the USA has been delayed for months and therefore requesting a ballot via regular mail may mean that you don’t receive it until AFTER the election! While we can help those who do not receive their ballots, the law requires that every state allows overseas voters to request and receive their ballot via email, and all states need to send the email ballots by September 20th, so then you will have time to send ballots back via the Swiss Post (for states which require mail in ballots). If you need further assistance, please contact the Vote From Abroad Help Desk at [email protected].

And, we have you covered for a quick reference guide to the requirements in your state! See our handy dandy reference guide by clicking here to see all of the information for your voting state.

If you need help with VoteFromAbroad.org, there will be 24-hour Zoom Help Desks available every Sunday starting on July 19th! See this post for more details.

Step 2:
Mark your calendars for September 20th. That is 45 days before election day, and all states are required by law to send out email ballots by that date. If you don’t receive your email ballot on that date, check your spam folder. And if you still can’t find it by September 21st (Monday when the offices are open in the USA) then it is time to call your LEO and ask for the status of your ballot.

Don’t wait until November.
Did you know that almost 20% of expat ballots were not counted in 2016 because they had some type of error? The most common error was not returning the ballot on time.

For the most recent information on FAQs about your 2020 ballot, please visit this post.

Congratulations on being prepared for voting in 2020! 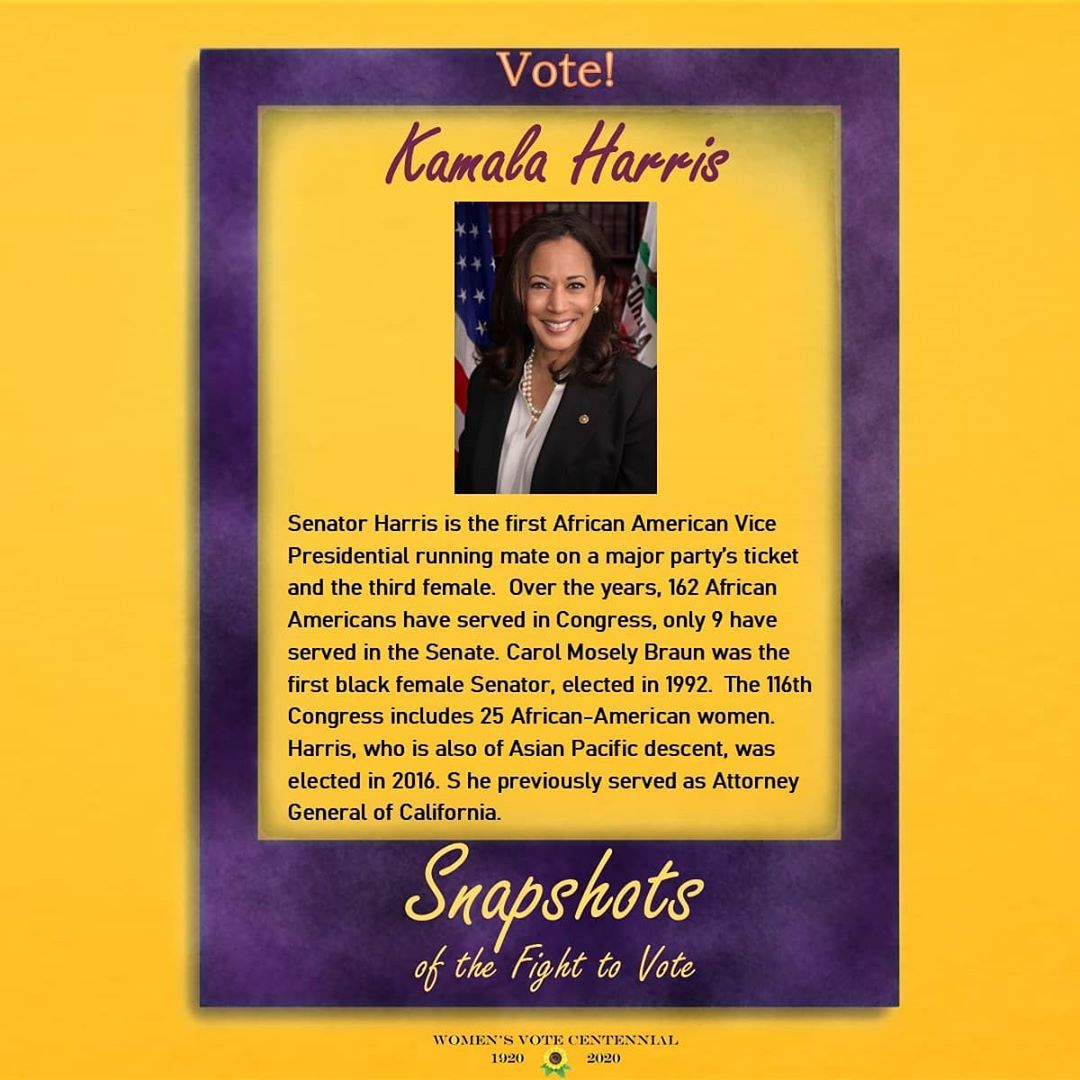 If you haven't been following our Suffrage Snapshots, now is a great time to catch up! But please also enjoy this special snapshot celebrating Kamala Harris!

Yes, we are having a contest! We want all of our members (as well as Swiss friends and youngsters!) to help to create visibility for VoteFromAbroad.org and DemocratsAbroad.org. So we are having a “Let’s Get Visible” contest via Facebook, YouTube, and Instagram where you can use your creativity to make videos highlighting our website and the election. It is quite simple. Just create a quick video in which you show some part of life in Switzerland (alps, lakes, meadows, cows, cheese, castles, vineyards, chocolate, skis, snowboards, etc.) and then talk about VoteFromAbroad.org. The video with most “likes” will win a prize! The official contest rules are outlined on our Facebook and YouTube pages or you can simply click here to access the rules PDF.

Have fun and create awareness all over Switzerland! Help us reach the approximately 11,000 American expats in CH who have not registered to vote via VoteFromAbroad.org.

A (Virtual) Conversation with European Ambassadors for Biden

We are now a mere four months away from presidential and congressional elections which will decide whether the American experiment in democratic governance perishes from this earth, or whether, to the contrary, with Joe Biden as President and Democratic control of the Senate and House, sanity, competence, and elemental fairness and justice can be restored to our country after these nightmarish past four years. It is time for us Americans Abroad, 8 million strong, to stand up and be counted in this stark choice, both with our votes and with our material support for the Democratic cause.

In the prevailing pandemic circumstances, the Democratic campaign has existed thus far almost exclusively in the virtual realm, much to the frustration of those of us here in Switzerland and elsewhere in Europe who see our U.S. political engagement more as an opportunity for convivial congregation and fellowship with like-minded compatriots than as an act of collective contribution to the war-chest of our candidates.

In the meantime, however, the campaign is intensifying, and our help is needed now. Our members have been invited to participate in a very special virtual happening on Wednesday, July 15 at 7:00 p.m. CEST, a “Conversation with European Ambassadors for Biden,” featuring Samantha Power, Ambassador to the United Nations in the Obama Administration; Charles C. Adams, Jr., former Ambassador to Finland; Mayor Eric Garcetti of Los Angeles; and Rufus Gifford, Deputy Campaign Manager for Vice-President Biden, former Ambassador to Denmark. The conversation promises to be lively, informative, and interactive, and you will be able to catch a glimpse of many of the same friends and fellow American expatriates with whom we have gathered in the past and will gather again in the future in support of a cause which we hold dear. Here is the link through which to sign up for this exceptional event:

This event is not organized or sponsored by Democrats Abroad Switzerland, but we thought it would be of interest to our members.