The workshop presented by Sociologist Laura van Berkel entitled Communicating with Conservatives lasted only forty five minutes, but the room full of listeners could easily have discussed this crucial issue for the rest of the afternoon. Her basic premise is that how we frame an issue is a statistically significant predictor of how our proposal will be received. It sounds so simple, but it is not always easy to put into practice, as we are often only used to talking to people who share our beliefs, and prioritize their values in the same way as we do. We speak in a sort of code and may rarely interact with persons who are suspicious of scientific data and mistrustful of government overreach.

Laura did an excellent job of compressing the basic facts and results of sociological studies into a compact format that made it abundantly (and graphically) clear that the way liberals present their arguments predicts the amount of acceptance they will receive. Here is an attempt to summarize her presentation:

· First some important Liberal values that underlie our attitudes were defined: Caring for the Welfare of others; Fairness and Reciprocity; Openness to Future Change; and Understanding and Tolerance. Conservative values present an obvious contrast: Patriotism and Respect for Authority; Loyalty, Purity and Respect for Tradition; Adherence to social expectations and norms; Security and Stability.

· Using the example of environmental issues she then contrasted approaches. Discussions on this subject are typically framed in ideological and moral terms that appeal to liberals, and evoke visions of what we can expect in the future. Studies were cited that prove that when the same issue is discussed in terms such as: “Follow the example of your religious leaders”; “Show your patriotism and love of country”; or “Make our founding fathers proud”, conservatives were some 20-30% more likely to approve of these environmental initiatives.

· We practiced among ourselves using other loaded issues such as abortion or gun control and agreed with Laura´s conclusion that: “Messages are more effective when they allow people to maintain personal values and outlook.” Conservatives are more likely to deny the existence of a problem that confounds their own identity and beliefs. Interestingly enough, the variation among liberals was nearly statistically insignificant between the two ways of framing arguments. I will leave the interpretation of this result to you.

This session reminded us, that in order to get an important message across, it is worth the effort to put ourselves into conservatives´ shoes, to try to understand the beliefs that shape their world view, and to use vocabulary and images that will make them at least listen, and possibly eventually convince them. It behooves our party to follow this advice too.

For further information, here are links to three recent newspaper articles pertinent to this discussion:

A German journalist follows the lives of one American liberal and one conservative for a year, before they meet in person, with a surprise ending:
www.zeit.de/2017/51/ein-jahr-donald-trump-waehler-stadt-provinz-erfahrung. A long read, but worth it.

Editorial by David Brooks on an organization that brings conservatives and liberals together to talk.
www.nytimes.com/2018/02/19/opinion/parkland-gun-control-shootings.html

Article on how conservatives interpret efforts to preserve National Parks in Oregon:
www.nytimes.com/2018/01/18/magazine/fear-of-the-federal-government-in-the-ranchlands-of-oregon.html

Book club members recommend Hillbilly Elegy and Deer Hunting with Jesus, both reviewed on this website:  www.democratsabroad.org/de-hamburg_news?page=2 . Those interested in environmental issues will appreciate Strangers in their Own Land, Arlie Hochschild´s attempt to understand the paradox that those who suffered the most from environmental pollution nevertheless continued to vote against their own interests for Republicans.

Even if you have not read this book you are invited to the next Book club discussion of it with coffee and cake around a cozy fireplace on: 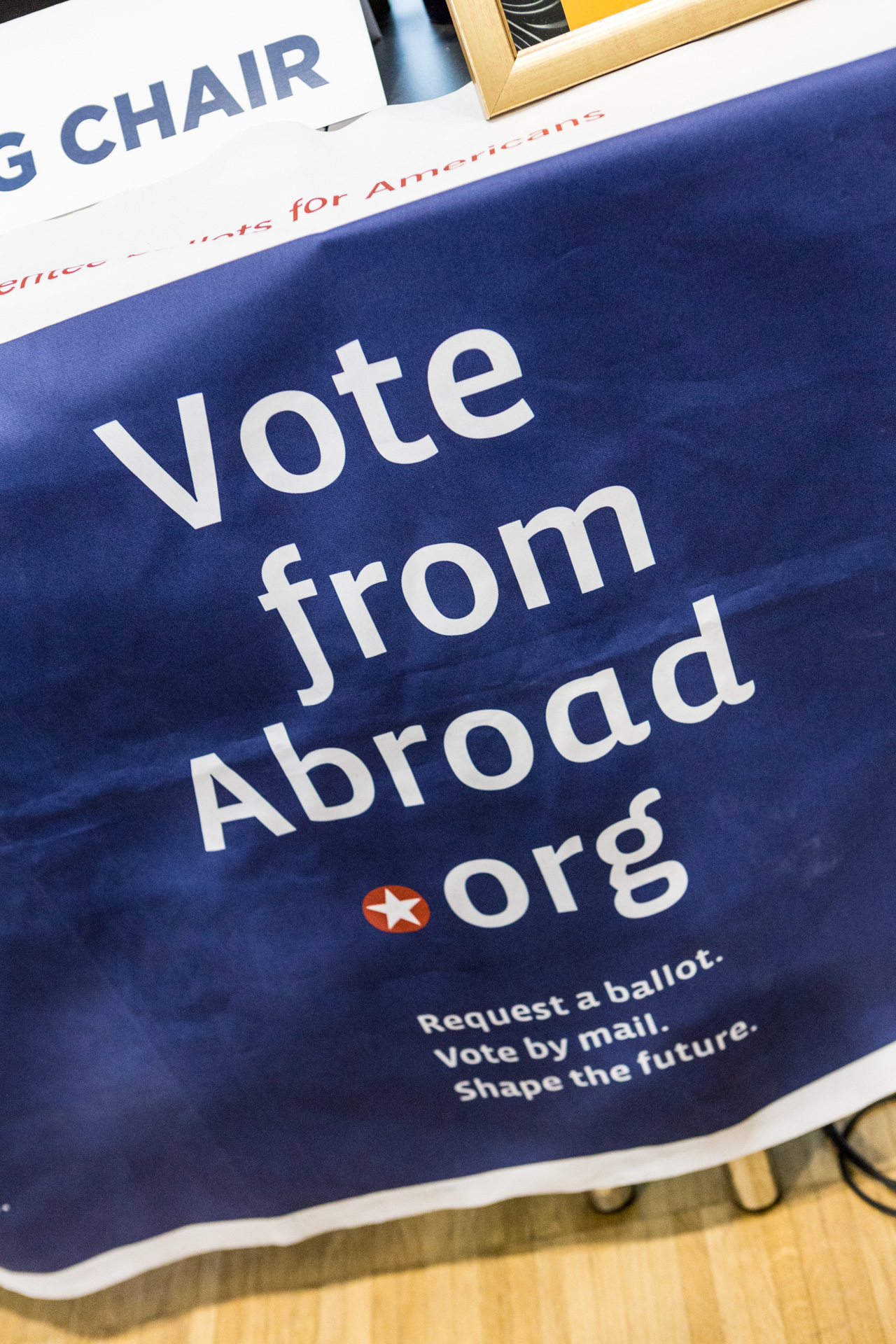 The AGM in Hamburg concluded with an ExComm meeting Sunday morning, which could have gone longer than the planned 6 hours. Best practices regarding the DA website, membership database and the DA Wiki were discussed, and members had the opportunity to share valuable information for the current election year. Katie Solon talked about phone banking, the single most effective way of getting Americans living outside of the US to vote.  (If you are interested in helping, you can find more information here: www.democratsabroad.org/gotv_phonebanking)

Also for GOTV this year, each chapter received a tablet and portable printer to make voter registration right at our stands and during other events possible. We were all very excited about getting started with these new tools. If you are interested in helping with our GOTV efforts or have ideas, please reach out to us at [email protected] or [email protected].

Finally, the location of next year's AGM was voted on. It was a close race between Kaiserslautern and Heidelberg, with Heidelberg winning by only a couple votes. After the positive experience of this year's AGM, we in Hamburg are very much looking forward to it! 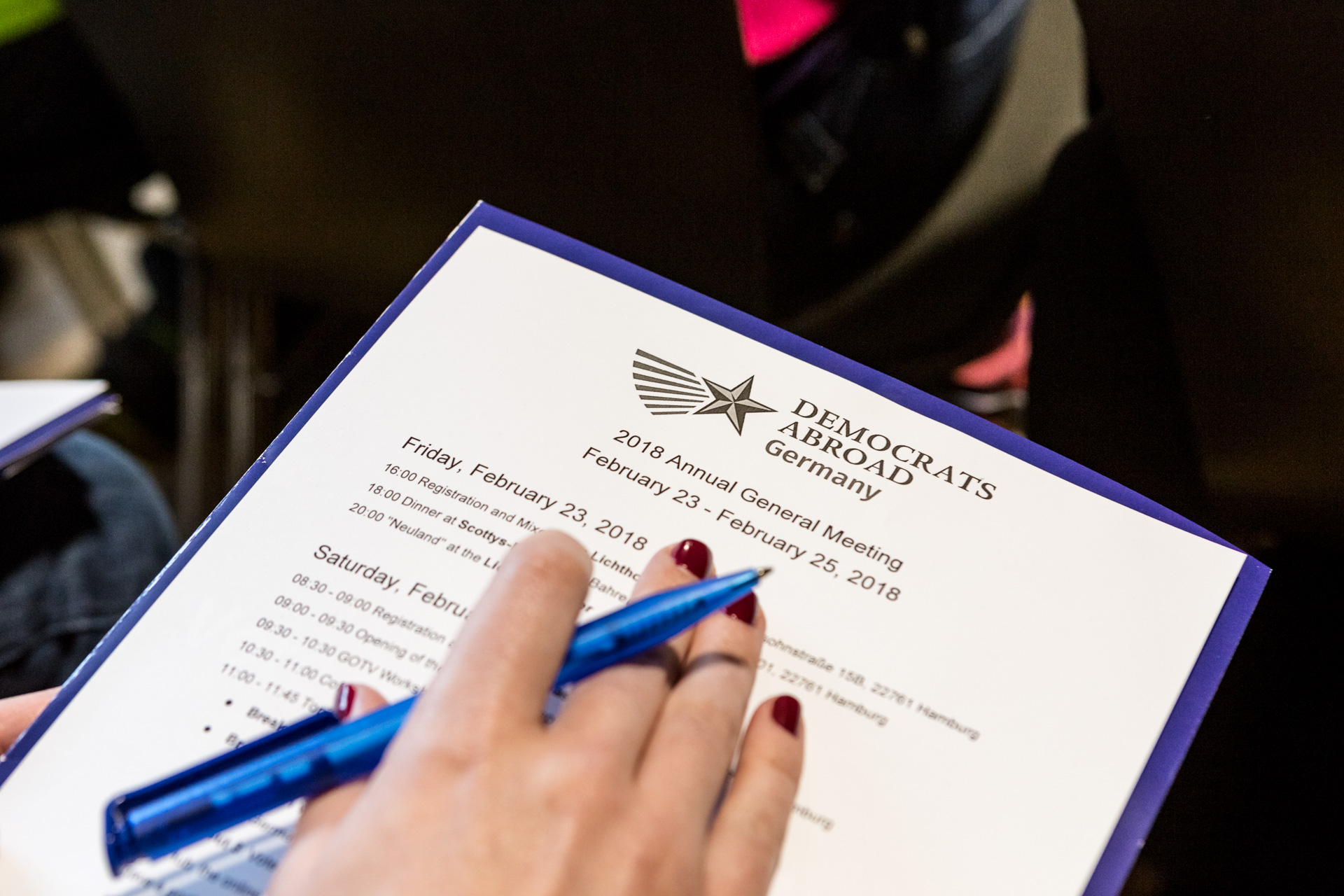 If you worry about the millions of vulnerable fellow citizens who will soon be deprived of health care, March With Us!

If you wince at every mention of pristine lands of great cultural significance, once preserved for posterity, being greedily turned over to drilling or mining, March With Us!

If you are sickened by the ever widening gap between the rich and poor just reinforced by the cynical, hypocritical new tax bill, March With Us!

If you believe that children of illegal immigrants should be allowed to remain in the only country they know, March With Us!

If you feel that truth should still have a place in political discourse, March With Us!

If you are convinced that climate change is real and that our country should not abandon its responsibility to lead the international community in preventing a disastrous future, March With Us!

If you understand the important distinction between patriotism and nationalism, March With Us!

If you respect basic human rights and freedoms and the constitution of our country,
THEN YOU MUST MARCH WITH US ON JANUARY 20th!

Please join us! We encourage you to bring candles and posters bearing any positive message of support for humane and democratic principles.

The march will conclude with information on how you can become active in preserving American democracy. Come rain or shine!

If you have any questions, please contact [email protected].

Please send this link on to any other Americans who might be interested in taking part. We look forward to seeing you on Saturday, January 20th!

The sun shone on Lübeck this Saturday! Not only literally, bathing historic buildings and bustling markets in a sharp winter light, but also figuratively, in the comfortable office of YouSpeak, where the Lübeck Precinct held its open house. Three hours of brainstorming discussions were only interrupted to continue with a glass of Glühwein at the nearby Medieval Advent Market in the shadow of the towering Marienkirche.

Discussions ranged from the practical—planning the upcoming March for Democracy on January 20—to the political—trying to prevent the loss of net neutrality and examining the wide-reaching implications of a tax bill that could change our country´s course entirely.

Most interesting were the theoretical questions. How can we help ourselves and each other to keep informed about so many complex issues that could play an oversized role in our future, such as environmental issues and climate change and its effect on livelihoods? How should political parties navigate the fine line between patriotism and nationalism? Or how to continue to react to the seemingly endless attempts to deprive millions of health care? We also asked ourselves: why should one become a member of Democrats Abroad and how can we encourage members to become more active volunteers? The answer—afternoons like this! Many thanks to Cynthia for her hospitality and Maryann´s cookies weren´t bad either.

During the week of Nov 8th, one year after the 2016 US election, Hamburg Chapter members came together to talk about Getting Out The Vote in 2018 and the status of our eligibility to take part in US elections as citizens living abroad.  We were joined by some new faces and used the opportunity to exchange ideas and talk about what we consider important for the future of the USA.  Some of our members also took part in another performance of Neuland, this time in Lüneburg.  Thank you to everyone who came out - we look forward to seeing you at other upcoming events!

Many Americans who have been living in Germany for many years are deterred from applying for German citizenship because of the German law requiring the renunciation of their American citizenship.

Almost 80 persons attended an information evening organized by the Hamburg Chapter of Democrats Abroad Germany to shed light on the subject.  What are the rules and regulations?  Where can I get more specific information concerning my situation?
Two officials from the Hamburg Naturalization Office presented the facts and answered questions.
Here is their presentation, in German.

On September 3rd, Chapter members met in Hamburg's Stadtpark to enjoy the beautiful weather and celebrate Labor Day (1 day early) with a picnic.  We enjoyed the late-summer sun, throwing the frisbee or football around, and enjoying taco salad, pico de gallo and homemade oreos, among other delicacies.  Hope to see you at our next get together!

We had our first pub night in Hamburg on August 17th, at the Irish Rover.  Over good food and drink, we talked politics and life in general.  The evening also included some political action with everyone attending writing a postcard to one of their legislators in the US about a topic of concern.  We hope to make this a regular event.  If you have ideas, please share them so we can look to offer events of this or any other kind that are interesting to you.

On August 16th, members of the Hamburg Chapter and others came together in front of the US Consulate in response to the deplorable events in Charlottesville, Virginia.  We had a candlelight vigil for those injured and killed, and in peaceful demonstration against racism and hate.  Thank you to everyone who made it at such short notice.

The Hamburg Chapter was present at this year's CSD-Straßenfest.  Our stand was set up Friday through Sunday, and we had an amazing time meeting everyone who came out to support equal rights.  We passed along information about DA and voter registration to many Americans living abroad, and raised money for our chapter and DAG.  This was our chapter's first time taking part, but it will not be the last.  Special thanks to all the volunteers who made this possible!