Democrats Abroad-Hamburg provided voting station on Saturday, March 7, 2020 from 11am to 6pm  around the corner from the Rathaus in Hamburg at the Julius-Leber-Forum (Friedrich Ebert Stiftung). The organizing team expected approximately 100 voters, and even more showed up -- a significant increase from the last GPP in 2016. NDR covered the event, which you can see here. 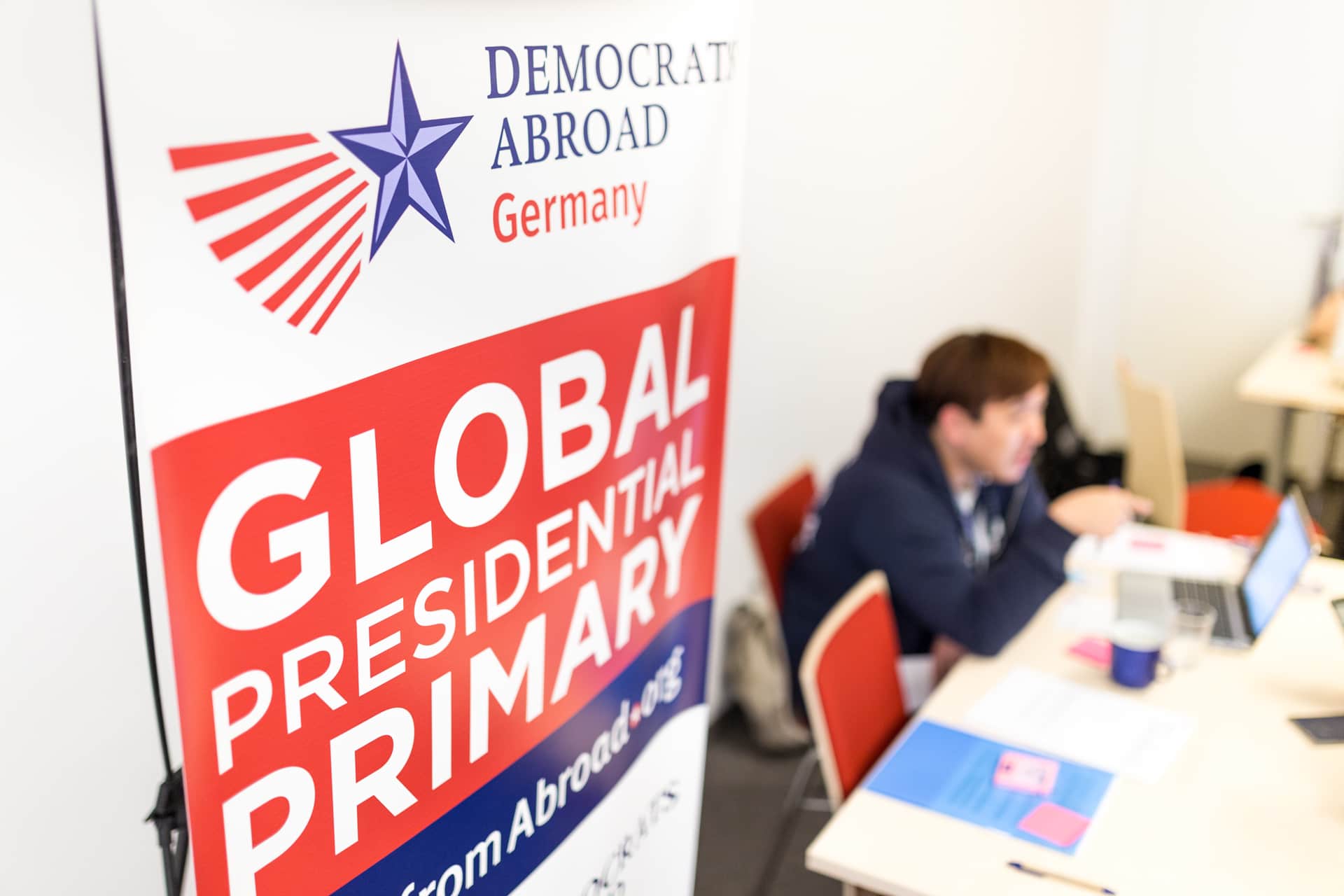 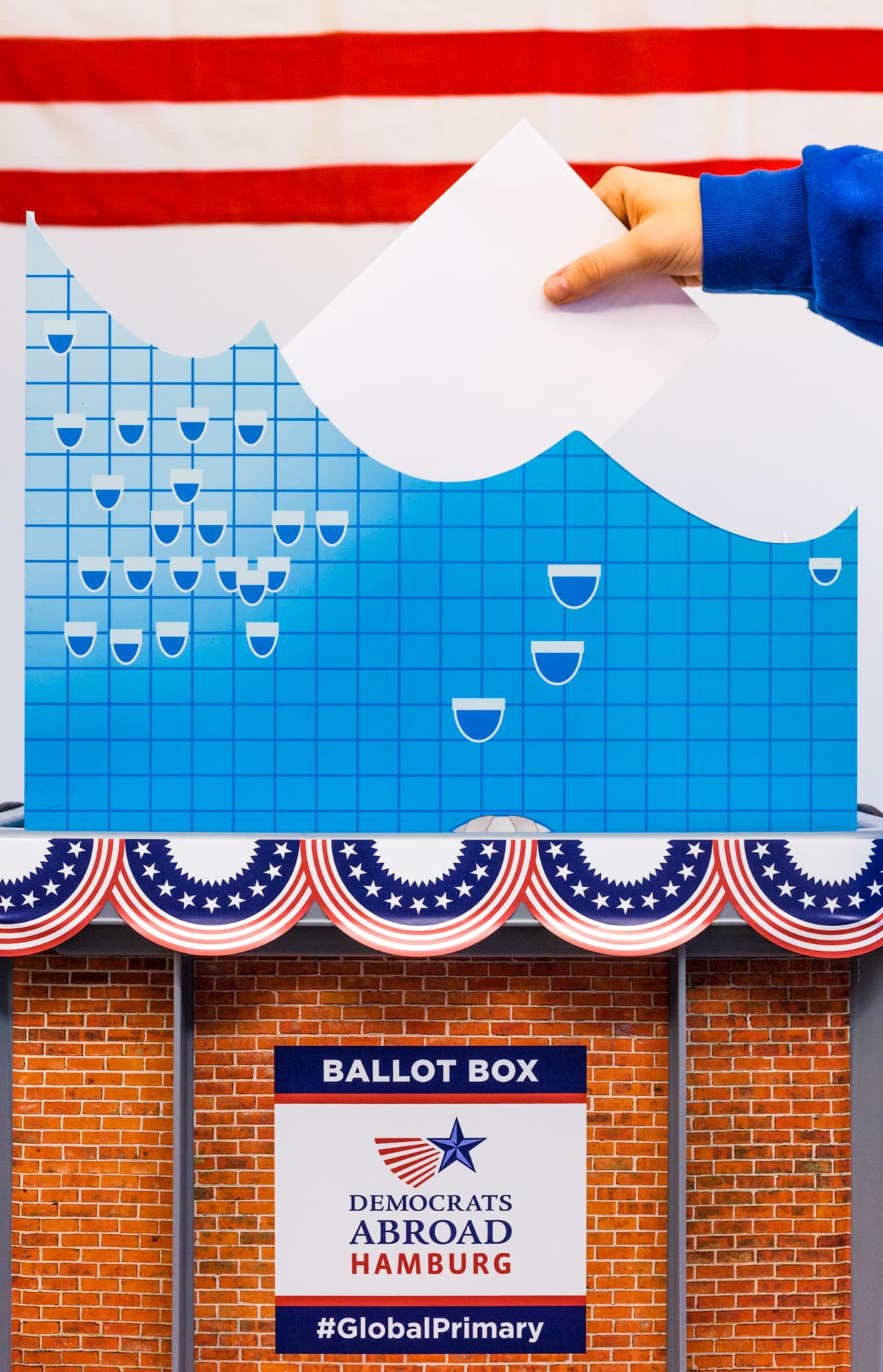 On Sunday, March 8, 2020, from 1pm to 5pm at Etage Bremen near the Hauptbahnhof, the Democrats Abroad organized a voting center in Bremen. Led by Mandi Larson, the organizing team welcomed 18 US voters in total. Read about it in the Weser Kurier.

Getting the Word Out Before the GPP

Our chapter has been making waves in Hamburg and Northern Germany! Our leadership team was especially busy in the week leading up to the Global Presidential Primary.

On February 27th, Vinnie Cabrera (Chapter Chair) and Natalie Roxburgh (Press and Communications) took part in a public discussion with the SPD's Arbeitskreis Internationales in Altona. The title of the discussion was "'Four more years' für Donald Trump? Oder können die Demokraten die US-Präsidentschaftswahl doch noch gewinnen?" The talk was moderated by Jan Meder, head of the Arbeitskreis Internationales SPD Altona, and we discussed how politics and society have changed in the last four years, what is unique about the US elections this year, and the importance of voting and knowing one's rights while living abroad.

Vinnie and Natalie were also interviewed by NDR 90,3 on March 3, which was aired later that day. They talked about the importance of the Super Tuesday election as well as the Global Presidential Primary in Hamburg. You can listen to the interview here.

On February 8th, 2020, the Dems Abroad Black Caucus, headed by Elaine Thomas (in cooperation with the AICC-Afro Int. Culture Center), hosted a roundtable discussion that focused on fundamental issues governing American racial policies, especially as they pertain to the preservation of American democracy. The panel consisted of speakers of various races, backgrounds, and roles in Hamburg's Chapter of Democrats Abroad, including Vinnie Cabrera (Chapter Chair), Natalie Roxburgh (Press and Communications), Joana O'Neil (Women's Caucus Chair), and Candice Newton (Treasurer and Young Dems Leader). The audience participated with insightful comments. The roundtable was also a kickoff event for a series of courses offered for Black History Month at the Hamburger Volkshochschule. For more information on these offerings, please contact Elaine Thomas ([email protected]).

After coffee and homemade cookies, some twenty five members began the meeting with a look backward to the highlights of 2019. This first meeting of the year was dedicated to the volunteers who have supported our chapter in so many ways. From attending meetings and drinking beers together on final Fridays, to demonstrating for our beliefs in front of the Consulate; from staffing our stand during the Christopher Street Day weekend, to informing exchange students of their right to vote from abroad—thank you all for your contributions!

Since this was not the beginning of just any year, but the year in which we finally have the chance to elect a new President, we used this opportunity to brainstorm about the way forward: how to reach the thousands of Americans who are not members; places where we can distribute vote-from-abroad information materials; how to persuade all of you to help with contacting members by telephone; and starting a podcast to share our stories with democrats all over the world.

We were delighted to welcome so many new faces to this meeting. There was commitment, urgency and energy in the room, even after three hours!

Text and Photo by Maryann Schmunk

Together with more than 2000 people, Democrats Abroad danced and celebrated love and tolerance through the streets of Lübeck. For the first time, the Lübeck precinct participated in the 2-hour Christopher Street Day parade proudly holding up our Happy Pride banner and Make America Gay Again signs. Our group was small but our message was loud and clear: our American values differ greatly from those of the current administration.

Following the parade we positioned ourselves at the market place handing out information and the ever-so-popular Trump in Drag postcards, answering GOTV questions, receiving ubiquitous free hugs and generally just having a good time.

Many thanks to our volunteers, especially to those from Hamburg, who traveled hours to help make our event a success.

We are looking forward to participating again next year with our own pavilion. Contact me if you have any suggestions and/or would like to volunteer.

Many thanks to all of you for volunteering your time and efforts during the CSD Pride Weekend in Hamburg. Thanks to you, we were able to sign up several new members and to have great conversations with Americans, Germans, and people of other nationalities who visited our stand. In these times, it’s important to show our community that not all Americans support the current administration and that there are many actively working for positive change. Our stand was also a financial success, with donations that will be of great help in funding get-out-the-vote efforts during the coming year.
Please join us again soon in Lübeck on 17 August where we will take in their CSD Pride Parade at 13:00 with our precinct leader Cynthia Walter and other volunteers.

My name is Vinnie Cabrera, and I am running for the position of Hamburg Chapter Chair. I have a bachelor’s degree from the Fashion Institute of Technology in New York City, and I am a graphic designer by profession with experience in various sectors including finance, healthcare, education, and retail. The Jersey Shore is where I grew up and where I am registered to vote, and I have voted in every election since I was naturalized as a US citizen. I moved to Hamburg in February 2017, just a couple weeks after Donald Trump’s inauguration. One of the first things I did after settling in Germany was to join Democrats Abroad because I was alarmed by the changes that happened in my community and the country at-large, and I wanted a way to be politically engaged and active despite being outside the United States.

Since joining Dems Abroad, I’ve been an active member of the Hamburg chapter, participating in and helping to organize events like the Women’s March and the March for Our Lives demonstration. I currently also serve as LGBT Caucus leader for the Hamburg Chapter, and I am particularly proud of our participation at CSD Hamburg Pride, which has been consistently one of our most successful outreach events. If elected Chapter Chair, my priorities will include continuing our chapter’s growth in membership, preparing for the Dems Abroad Global Primary in 2020, and organizing GOTV events all throughout the 2020 leading up to the presidential election in November.

Lights for Liberty: A Vigil to End Detention Camps

For the second time in a year, we felt the urgent need to draw attention to the inhumane situation on the southern U.S. border. Since our first protest in 2018, the situation has only intensified, sickness and deaths increased, and a real solution still seems nowhere in sight. But not doing anything is also not an option, and a least these vigils all over the country have shown our solidarity with democrats in the U.S. who are investigating and testifying.

Thank you to all of you who came out to stand before the U.S. Consulate in our candlelight vigil against this human tragedy. And thank you once again, Chesney, for giving eloquent voice to our collective grief.

"Has it really been a year?" a few of us sheepishly asked each other. That made us only all the more grateful for this most traditional of American holidays which had brought us together to enjoy hamburgers and beer in such a friendly and relaxed atmosphere. There was a great deal to talk about, so soon after the democratic candidates' debates. First, though, there was a grateful, but a sad toast to Chesney who has played a significant role in our chapter since the day we met in March 2016, but who will leave Hamburg shortly. And finally, there was a round of answers to the questions: "what do you like most about our country?" and "what would you wish for us before we meet again next 4th of July?".

The twenty five answers were varied, and offered praise for American openness and friendliness; for standing up in protest when our democracy is threatened; for the important work of the American Bar Association in defending our values; for the National Parks which preserve the future for all; and for PIES, of every shape and form. The wishes were wide-ranging, but most were variations of the sad fact that many of us will not be able to have a sound night´s sleep until the current occupant of the White House is replaced. There were hopes for an electable democratic candidate, and for dialogue instead of polarization, and we all vowed to see each other more often in the next months to help to get-out- the-vote!