Compared to mid-term primary elections of recent years, Tennesseans came out to cast their ballots and support their candidates this past week. I’m especially loving the remarks below from a recent article on Hamilton County:

“I was coming no matter what — I’ve got umbrellas in the car,” he said… “I refuse to be mute on things that are important to me and the community.”

When it comes to Hamilton County Democrats, early voting turnout was a dismal 5,655 in 2014 but this year’s early voting tally shows a huge 65-percent jump to 9,338.

Meanwhile, over in the Caribbean our fellow U.S. citizens are obviously doing something right as can be seen below: 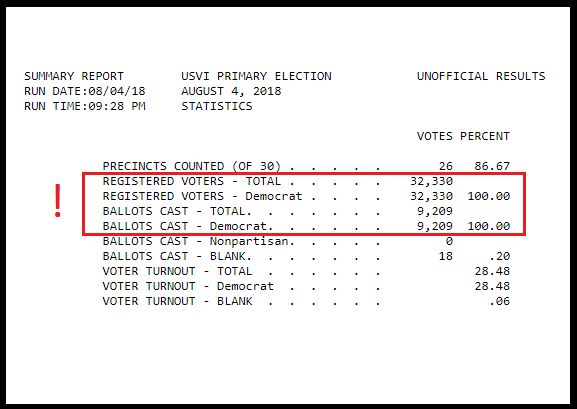 Despite a few minor issues, voters in the U.S. Virgin Islands managed to get through the primary without any challenges too difficult to overcome.

With the U.S. Virgin Islands and Tennessee now having completed their primaries, please take a look below to see who the Democrats Abroad Hispanic Caucus endorses for November’s General Election.

U.S. Senate
Phil Bredesen (challenger to open seat) ←This would be a major Democratic victory

Why is a Blue Wave needed for this November? Republicans are destroying the American values we all cherish. Immigration: even our Founding Fathers and the Statue of Liberty herself are immigrants to the U.S.; yet, Dreamers’ fates remain uncertain while families are ripped apart at the border. And don’t forget about how “Mexico is going to pay for the wall” – remember that? Science: a noted climate and science denier was nominated and confirmed to be in charge of NASA out of all places. Voting rights: suppression efforts are well underway across the U.S., from pro-gerrymandering court decisions to closing polling locations to not having non-English voting instructions available to having “the right kind of identification” at the polls. The list goes on and on.

So do we rectify this?

Step 2: Talk to every stateside and overseas American you know and tell them to do the same things mentioned in Step 1.

Step 3: Jump on the phones and help us get out the vote by calling fellow Democrats Abroad members and reminding them to vote!

The Hispanic Caucus urges you to vote FOR the candidates listed below (with their names in bold font). Our party has some top-quality candidates running for reelection or running for election for the first time, and if you vote in one of the following states you should be proud to cast your ballot in support of the Democratic candidate.

Still not convinced? Let’s take a moment to view what’s at stake for November’s elections. On the ballot are some “very fine people” – as the president calls them – such as:

With the primaries of these several more states drawing to a close and despite a few glitches here and there, we proudly endorse the following Democratic candidates for election:

With over forty congressional Republicans retiring or resigning, the opportunity to take back Congress keeps getting better. A South Carolina Republican congressman lost his primary to someone fully endorsed by Trump. A legal pimp knocked off an incumbent in the Republican primary in Nevada.  A conservative “gun owner’s champion” won his primary in North Dakota. These are not the people who should be running our country.

With that, Democrats Abroad’s Hispanic Caucus is thrilled to continue with our endorsements for the below candidates running for office  (with their names in bold font).

(Maine used “ranked-choice” voting in this election, meaning, voters will have an opportunity to vote for their first-choice candidate and to rank the remaining candidates in order of preference  (i.e. second choice, third choice, etc.). An example can be seen  here.)

The District of Columbia Finalizes Its November Contenders

Although “voters going to the polls braved sweltering heat and thundershowers, which probably contributed to low voter turnout,” primary election results from inside the Beltway confirmed that residents from the District of Columbia are determined to keep their turf blue. Republicans know that their pro-Trump ideology isn’t welcomed there, and D.C. voters living abroad have every right to defend the District’s Democrats up and down the ballot.

Democrats Abroad’s Hispanic Caucus is once again prepared to proudly endorse the following candidates for Election Day in November  (with their names in bold font).

With perhaps the most significant day of the 2018 primary season, the polls are closed in Iowa, Montana, California, Alabama, New Mexico, South Dakota, New Jersey, and Mississippi. Democratic candidates for office in these eight states have shown to be serious contenders to win over seats currently held in Republican control. And thanks to you, there are reports of good Democratic turnout in yesterday’s primary compared to previous election cycles. For example, check out what’s being said in Iowa: “Iowa Secretary of State Paul Pate reported at around 4:30 p.m. Tuesday that 50,610 absentee ballots had been received, surpassing the previous state primary election record of 44,740 in 2014.”

It seems like every day there is more controversy coming out of the White House or Congress, but the remedy is for all voting-age Americans to cast their ballots for Democrats. Issues important to the U.S. Hispanic community and U.S. expats are solid reasons for voting as early as possible.

Accordingly, another round of proud endorsements by Democrats Abroad’s Hispanic Caucus includes the below candidates  (with their names in bold font).

By the time 2018 comes to an end, we will undoubtedly see a notable election year for the history books. Worthy Democratic candidates -- from Latinos to women to LGBT to progressives -- are challenging Republican officeholders as sensible alternatives to the Trump agenda. With the following names in bold font shown below, the Democrats Abroad Hispanic Caucus urges all U.S. voters from Arkansas, Georgia, Texas, and Kentucky to support the following candidates:

As a reminder, using VoteFromAbroad.org is a great resource for registering to vote and requesting your ballot. With your determination and vote, we will make America respected again.¡Sí se puede!

Like those flat-earthers of years ago who suddenly realized that the world is in fact round, Republicans are starting to realize that their “safe” districts are not at all “safe Republican seats.” As the dust settles from the mid-term primaries now completed in Idaho, Oregon, Pennsylvania and Nebraska, Democrats with bold agendas have emerged as strong contenders for challenging establishment, do-nothing officials.

And with that, Democrats Abroad’s Hispanic Caucus fully endorses the following candidates running for office (with their names in bold font).

Friends, Colleagues, and Newcomers to the Hispanic Caucus—

Are you fired up? Get ready, because you don’t want to miss this chance to boot out GOP elected officials and replace them with diverse, outstanding Democratic candidates in November. We also need to defend our incumbent Democratic officials by using the power of the ballot to retain their needed public service. With the 2018 primary results completed in Illinois and half-way done in Texas, voters from West Virginia, Ohio, North Carolina, and Indiana have a genuine shot to continue flipping seats once thought of as “un-flippable.” With that, Democrats Abroad’s Hispanic Caucus is thrilled to continue with our endorsements for the below candidates running for office (with their names in bold font).

For all Arizonans who vote in the 8thCongressional District—

While your state’s primary isn’t until August 28th, those of you who vote in AZ-8 have a golden opportunity to flip this seat from red to blue. If you’ll recall, former GOP Rep. Trent Franks suddenly resigned after sexual misconduct allegations. The special election to fill this seat is April 24th.

Please ensure you cast your vote as soon as possible if you haven’t already done so. And in case, you have any questions about the Democratic candidate running for this seat, see below.

For all of the above reasons and many more, the Democrats Abroad Hispanic Caucus is proud to endorse Dr. Tipirneni for Congress.

Don’t forget, your spare time would be put to productive use if you help us with phonebankingour fellow Democratic citizens worldwide in reminding them to get their overseas absentee ballots mailed out!^

More Than 1.2M Voters Turn Out In Illinois Democratic Primary

More Than 1.2M Voters Turn Out
In Illinois Democratic Primary

Thanks to you, Illinois Democrats turned out in higher numbers in more than a decade for a mid-term election. Remember, outside of Chicago and upper northwest, the rest of “downstate” Illinois has Republican representation in the House. And like what we recently saw Texas, it’s clear that Illinois Republicans are barely hanging on by a thread for the time being, and it’s up to us as voters to boot EVERY. SINGLE. REPUBLICAN. OUT.

For a list of IL election results, see here.

If you vote in Illinois, here are your Democratic candidates who we should be electing in November: