DACH has been seeing record numbers in membership, ballot requests, volunteers and event attendance. The first debate watch in Geneva was attended by more than 70 enthusiastic Americans and friends. The final Clinton-Trump presidential debate of the 2016 U.S. Election will break another record when we have volunteers hosting viewing parties in five cities. Groups will be gathering the evening of Thursday, 20 October in Basel, Geneva, Lausanne, and Zurich, with a Saturday viewing party in Berne.

We are so happy to see so much engagement and enthusiasm. And we continue to seek out new volunteers to help us extend Democrats Abroad activities into regions all over Switzerland. If you are interested in volunteering, fill out the I Want to Volunteer form or send an email to [email protected]

Sign up to join a fun team of Swiss-based Americans organizing get-togethers, after-work drinks, election events, along with membership outreach, social media strategizing, discussion of cats and kids, and one volunteer whose practicing baking the perfect cheesecake.

Hannes Blitz This is America

Thirty-two oil paintings in the solo exhibition This is America present fragments of moments, objects and places from Hanne Blitz's two months in the US last summer. A journey of snapshots of American life and society, revealing the little and big things that make the country different and special, the exhibition lets you discover surprising parallels and contrasts, beauty and dark controversy. Entertaining for adults and children alike, you are invited to meet Hanne's art in This is America! 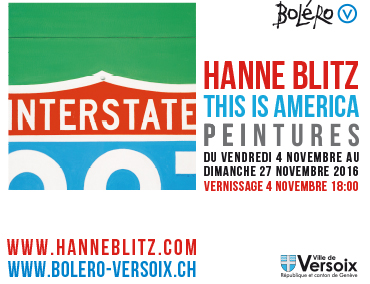 Volunteer for Geneva's Biggest Party of the Year

This Presidential election is facing some of the highest stakes in our collective memory. The moment we're all waiting for is Election Night!

As you've surely heard, the AENC Joint Committee was formed this year to host an American Election Night Celebration in Geneva on November 8 starting at 9:30pm through the night until the victory speech in the early morning of November 9. The party is open to everyone, American or otherwise. Information on the venue will be sent to participants by email on November 6, but we can already tell you that it will be a great location!

We are expecting more than 300 guests and we need your help to pull this event off.

Shifts are short and here's the sweet:

For those who have more time but less money, a generous donor from Democrats Abroad Switzerland has offered us 10 tickets so that we can offer an incentive for volunteers to come help out. If you can commit to a minimum of two 2-hour shifts, and 60CHF for a ticket is hard for you, we can slash the cost of your ticket to 30CHF.

Sign up at SignUpGenius or send an email to [email protected].

In the lead up to the critical 2016 U.S. presidential election, Democrats Abroad Switzerland will be hosting a series of events to inform, energize and assist U.S. voters abroad. Over the next two months, members of Democrats Abroad Switzerland will be active in Geneva, Zurich, Basel, Bern, Lausanne and Lugano among other cities across the country. These efforts are targeted at mounting a get-out-the-vote drive to support Hillary Clinton for President 2016 campaign and all Democratic Party campaigns.

As the first of these Fall 2016 pre-election events, Democrats Abroad Switzerland is proud to host two speakers: the Honorable Eileen Donahoe, former U.S. Ambassador to the United Nations Human Rights Council in Geneva and Caitlin Kraft-Buchman, head of [email protected], a Swiss NGO dedicated to making women visible on the global stage (see speaker biographies below). Both speakers will address campaign goals as well as international issues at stake. After Ambassador Donahoe and Ms Kraft-Buchman make informal remarks, guests will have the opportunity to meet with the speakers, register to vote, and sign up to volunteer for the Hillary for President 2016 campaign.This exciting and informative kick off event is scheduled to take place on Wednesday, September 14, 2016 from 6:00 to 8:00pm at the Cercle des Bains, 10, rue des Vieux-Grenadiers, 1205 Geneva, in the heart of Geneva’s Plainpalais arts quarter.

Anne-Shelton Aaron, Chair of Democrats Abroad Switzerland said that both speakers will discuss the high stakes involved in the upcoming election and the importance of ensuring that the vast majority of the nearly 7 million voters abroad cast their ballots and participate in the Democratic process. “We’ve seen a surge in voter engagement this year beyond anything anticipated. Voter registration has only accelerated since the Democratic Convention, and our get-out-the-vote drive will ensure that this momentum continues. The number of votes cast by Americans in Switzerland looks set to break records even exceeding the totals of 2008 and 2012.”

Anne-Shelton Aaron went on to emphasize, “Hillary Clinton, as a former Secretary of State, has a mastery of policy unmatched by any nominee in decades. Secretary Clinton understands the needs of Americans both at home and abroad. Her election is critical to maintaining and building upon President Obama’s legacy as well as to electing Democratic majorities in the U.S. House and Senate. This is why she is poised to capture the majority of votes cast by Americans abroad.”

Eileen Chamberlain Donahoe is a former U.S. Ambassador to the United Nations Human Rights Council in Geneva, Switzerland, having been appointed by President Barack Obama in 2009. (She was the first ambassador following the referent UN body changing from the predecessor United Nations Commission on Human Rights.)  After serving her term as ambassador, Ms Donahoe was appointed as Director of Global Affairs for Human Rights Watch. In 2014, she was also appointed to the board of International Service for Human Rights.She is also a former affiliate of Stanford University's Center for International Security and Cooperation.

Caitlin Kraft-Buchman runs the Swiss NGO [email protected] which makes women visible on the global stage and women leaders a point of reference in cultural conversations that extend past 'women’s issues' into the larger debate on the economy, governance, technology, sustainability, and peace. She is one of the three co-founders of the International Geneva Gender Champions movement.  A former Chair of Democrats Abroad, Switzerland (2004-2009), she proudly represented Democrats Abroad at the Democratic National Committee, (2008-2016), where she served on the DNC Women’s Caucus Board. She was an early and enthusiastic supporter of Hillary Clinton’s now historic candidacy.

Democrats Abroad Switzerland started the Get-Out-the-Vote 2016 campaign by organizing a series of training sessions designed for volunteers who are considering participating in voter registration activities or those who would like to host an event. Our weekly sessions are conducted online for the most part, so participants from anywhere in Switzerland can join in – or anywhere in the world for that matter. We held a session in late July that was attended by Democrats Abroad members worldwide.

The training presentation is intended to familiarize anyone with the basics involved ​in assisting voters with ballot requests, by reviewing the absentee ballot request and voting process, and discussing the unique challenges for overseas citizens. Training includes a review of available online resources, a discussion of what's involved in setting up a VFA table at an event, or hosting your own Voter Registration Drive.

We have three upcoming training sessions: this week we will have a live session on Thursday, August 25 in Coppet, Switzerland, just outside of Geneva (and easily accessible by train). We have two online sessions scheduled for the early evenings of Thursday, September 1 and Tuesday, September 6. We welcome anyone to attend, even if you've been registering voters for years, or you are just curious to learn more.

Our Get-Out-the-Vote 2016 efforts need people to make them work, so we encourage everyone to sign up for a training session now! Any questions? email vote (at) democrats.ch.

The first time Senator Kaine came to Geneva, he was Governor of Virginia and the Chair of the DNC. The February 2010 Democrats Abroad Switzerland newsletter gave an account of the event:

Democrats Abroad members were given a special treat in Geneva on Friday, February 12th.Governor Tim Kaine, Chairman of the Democratic National Committee, was in town and addressed a group of more than 80 DACH members at a free event hosted by Anne-Shelton Aaron at her beautiful home. Governor Kaine finished his first European tour as DNC Chair, visiting London and Moscow before coming to Geneva. The Governor was welcomed by DACH executive committee members and International Democrats Abroad chair Christine Schon-Marques. 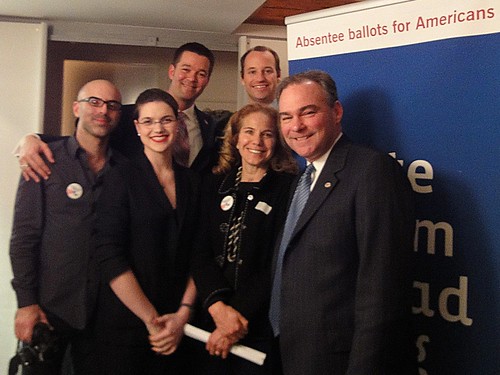 In his remarks, Governor Kaine covered a variety of topics including the recent special election in Massachusetts, the Supreme Court decision on campaign finance, and the Democratic plan for the 2010 midterm elections. Afterwards, Governor Kaine took several questions from the audience, posed with members for photos and answered more questions before leaving to attend a fundraising dinner elsewhere in Geneva. To close the evening Democrats Abroad Vice Chair, Michael Copping presented the Governor with a box of chocolates from famous Geneva chocolatier Auer. For more photos from the event, visit our Flickr page. 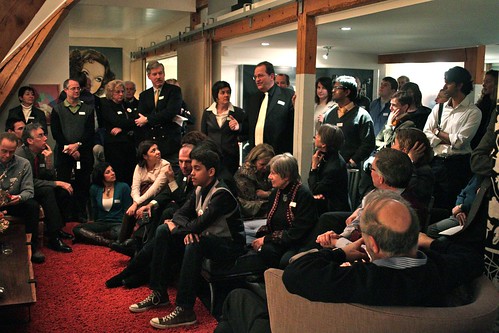 This Year's AGM: This Sunday in Basel

Democrats Abroad Switzerland is your organization. The Annual Meeting is held for the members to inform you of our activities and accomplishments over the past year, and of strategy and plans for the current year to get out the vote.

Come find out what you can do to help put Democrats in the White House, Senate and House.

Come participate in discussions with Dr. Rebecca Self after her presentation about the Democratic Party's possible paths to success.

Come meet our volunteers who will help you draft and send letters to your Senator and Representative about your particular issues of concern.

Voter Registration training will be available before the meeting with tips on publicizing in the local community and running a voter registration table at a public gathering. Bring your laptop or tablet (optional).

Food and drink will be available for purchase - menu.

Those who cannot attend in person may attend remotely via WebEx (RSVP to [email protected] and indicate "in-person" or "remotely by WebEx").

Treat yourself with an item of our exclusive swag, illustration courtesy of political cartoonist Rachel Berman.

All donations help raise essential funds to support our Get Out the Vote initiatives this election year.

Donation costs cover shipping within Switzerland. You must be a U.S. citizen to donate.

If you ever wanted to give your time to a cause guaranteed to make an impact, this is it! Sign up now to help Democrats Abroad Switzerland register voters and help Americans request their absentee ballots for the 2016 election. We are stepping up our Get Out the Vote drive for the upcoming election so we want to have lots of VFA tables at venues and events all across Switzerland.

Democrats Abroad is dedicated to guaranteeing that overseas American citizens can exercise their right to vote in U.S. elections, and reminding Americans Abroad to request and mail their absentee ballot each election cycle.

If you are ready to help, then fill out our online Voter Registration Volunteer sign-up form!

We will give you the information, tools, and support you will need to help Americans living in Switzerland vote.

Volunteer to Help at the Global Primary

The Global Primary is fast approaching, and we still need some help! Can you step up?

Doesn't matter if you never volunteered before, this is a great time to join in the excitement of the 2016 election. No matter what your talent is, chances are we can put it to good use. We're always in need of friendly people to greet and assist our members, help us blog and post on social media (use #GlobalPrimary or #2016GPP) including photographers, and to help set up and clean up.

Write to [email protected] and specify which Primary Event (GENEVA or ZURICH), your prefered role and shift.