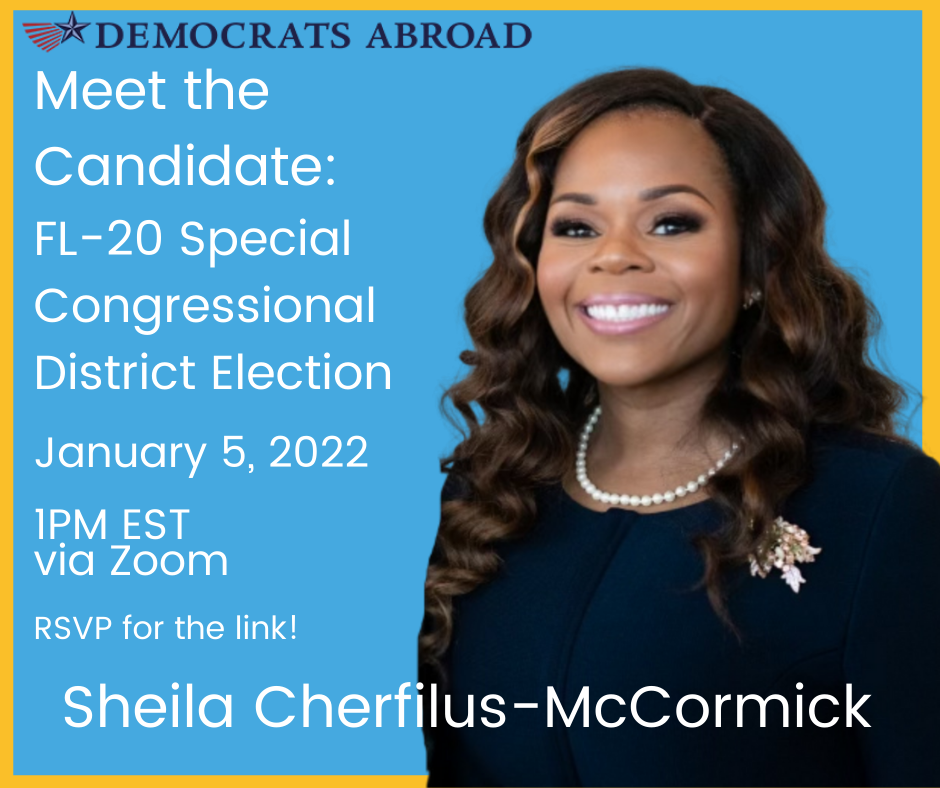 Join us on January 5, 2022, to meet Sheila Cherfilus-McCormick, the Democratic candidate in the January 11 Special Election in Florida's 20th Congressional District!

RSVP below to receive the link.

Sheila won the Democratic primary in November in a field of 11 candidates, following the death in April, 2021 of Representative Alcee Hastings..  If elected on January 11, 2022, Sheila would represent a majority-minority district with over 260,000 immigrants.  Sheila is herself a daughter of Haitian immigrants.  Immigration reform is a key priority for Sheila and she will fight for a clear path to citizenship for the many undocumented workers who contribute so much to the American economy.

Sheila has worked for the last 20 years in expanding a company that provides home-based healthcare and vocational medical training in south Florida.  During the Covid epidemic she led the company to partner with the Federal Emergency Management Agency (“FEMA”) and the Florida Department of Emergency Management to vaccinate over 300,000 Floridians.  As a result of her long career in healthcare, Sheila is committed to universal healthcare, seeing it as a right, not a privilege.  She supports “Medicare for All” and will work to end racial and economic disparities in the American healthcare system.

Sheila will talk about why she decided to run for Congress, the issues important to her and her constituents, and about her own career experience as a graduate of Howard University and St. Thomas University School of Law.  She began her business career as a project manager and joined Trinity Health Care Services in 1999, rising to Chief Executive Officer.  When the pandemic started in 2020,  she led a campaign to assist small businesses to enroll in the federal Payment Protection Program.  Recognizing the increasing income inequality in the US. Sheila supports increasing the minimum wage to $20 an hour and believes in a universal basic income of $1,000 a month for low-wage Americans to recover from the pandemic. For more information on the policies Sheila will fight for, go to the campaign website:  www.sheilaforcongress.com

The event will be online via Zoom and will be streamed on Facebook live.  To submit questions in advance, email [email protected]