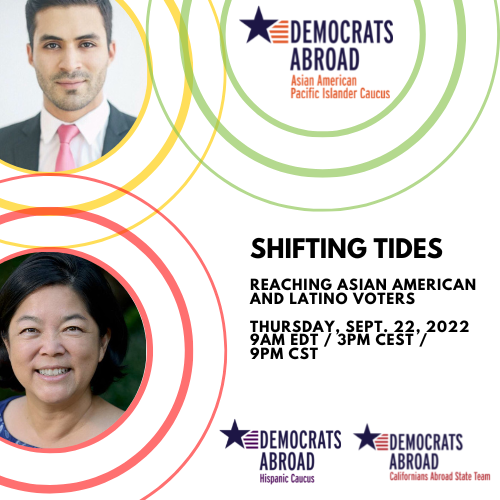 Asian Americans and Latinos are the fastest growing populations in the U.S. What is behind their swing away from the Democratic Party? What can we do about this, and what do we need to know? Join our conversation with Rudy Espinoza Murray, President of the San Mateo County Latinx Dems and former chair of Redwood City’s Redistricting Commission, and Kathay Feng, National Redistricting Director of Common Cause, to talk about voting behavior, preventing voter drift, and to discuss ways to ensure that these communities are heard.

Rudy Espinoza Murray has held executive, board, and founding member positions in multiple organizations. He has a strong background in grassroots organizing - most recently co-founding a large coalition of progressive groups to support federal, state, and local races. Through strong partnerships, his field office was responsible for more than 10 million calls to voters in key states, including Arizona, Nevada, Georgia, Pennsylvania, North Carolina, Iowa, and California during the 2020 election cycle. In 2021, following the 2020 Census, Rudy was appointed to serve on the San Mateo County Redistricting Commission, and was also appointed to serve on the Redwood City Redistricting Commission where his fellow commissioners voted him as chair.

During the day, Rudy works for a leading tech company as a Sr Product Marketing Manager. Rudy and his husband have a daughter, Avery Elena, and their cat, Leia.

Before joining Common Cause in 2005, she headed the Voting Rights and Anti-Discrimination Unit at the Asian Pacific American Legal Center. She serves, or has served, on numerous boards including the California Secretary of State’s Advisory Committee on Voter Participation and Outreach, the LA County Human Relations Commission, and the Asian Pacific Policy and Planning Council. She is a graduate of Cornell University, and holds a law degree from UCLA School of Law.