Voting By Proxy for the 2017 Annual General Meeting

We strongly encourage all members to attend the AGM as a quorum is necessary to validate the election results. All members who joined DANL before 11 March are eligible to vote by proxy (you can find the form here). New members can vote in person on 25 March, provided they have joined any time up to an hour before the meeting, or by 14.00. Proxies can be downloaded, signed and handed to a designee attending the AGM. One designee can have no more than two proxies for voting.

Additionally, the minutes to the 2016 AGM can be found here.

Important Notice Regarding the 2017 DANL AGM -

U.S. Democrats in the Netherlands to cast deciding votes to elect Clinton and a Democratic Congress?

Democrats Abroad is currently helping Americans in the Netherlands request their ballots for the U.S. general election this November. U.S. citizens can get help at in-person events and through our online tool, votefromabroad.org. In the next month, members of Democrats Abroad in cities across the Netherlands will be registering voters at weekly events, phone banking members, and will be on hand to answer voter questions at the “i am not a tourist” Expat Fair at the Beurs van Berlage October 2.  This mirrors the efforts of Democrats Abroad around the world, whose chapters are hard at work supporting the 6.7 million U.S. citizens living abroad who are eligible to vote this year.  These efforts include social media outreach and phone banking to members of Democrats Abroad, which for the first time is being conducted and co-ordinated online. At a global level, the DemocratsAbroad.org Help Desk is also providing 24/7 voter assistance to anyone who has questions about how to register and where to send their ballot.

Jeff Rupp, Chair of Democrats Abroad Netherlands said:
"Democrats living in the Netherlands are working hard to make sure every American knows how to request a ballot and that they get their ballot returned in time for it to count. We want to ensure Americans also understand the stakes in this election and that Hillary is the choice for everyone who wants to make sure Trump doesn’t undo all the gains President Obama fought so hard for with health care, marriage equality, and a recovering economy after the worst recession in any of our lifetimes. Because of these efforts, we expect more votes to be cast from U.S. citizens in the Netherlands than in 2008 or 2012."

On behalf of Democrats Abroad Netherlands, DANL Chair Jeff Rupp laid a wreath at the Memorial Day ceremony at the Netherlands American Cemetery at Margraten, Limburg.

8,301 American soldiers who died in World War II are buried there, and 1,722 soldiers missing in action are honored at this vast cemetery of 65 acres.

It was a moving ceremony, where wreaths were laid by representatives of NATO member-States and many civil organizations. We can be proud of the ultimate sacrifice that so many of our compatriots made for our freedom. Democrats Abroad Netherlands, the official arm of the Democratic Party outside the United States, has launched its campaign to help Americans citizens living abroad to nominate the U.S. Democratic Party's Presidential nominee. (1)

Any Democrat living abroad (2) can take part in the Global Presidential Primary by joining Democrats Abroad via its webpage or the dedicated voter registration/ballot request tool, VoteFromAbroad.org. Membership is free.

There are two opportunities for Americans in the Netherlands to vote in the Global Presidential Primary:

After March 8, the votes of Democrats living in over 190 countries worldwide will be counted. Any candidate receiving 15% or more of the primary votes cast will be awarded delegates in proportion to their support in the Global Presidential Primary.

Democrats Abroad will have 17 delegate votes at the Democratic Convention, held in Philadelphia on July 25-28, 2016. (4)

From the Netherlands, Democratic National Committee member Bob Bragar will be attending the convention in Philadelphia as a delegate. He said, "This year's Republican candidates are more extreme and dangerous than ever before. While Democrats offer hope, Republicans give us fear. For the safety of the planet, we urgently need to elect Democrats this year. Every Democrat needs to get out and vote."

"We are at the start of the U.S. state primary season. The Democratic and Republican Parties will be making their choices for their Presidential candidates" said Jeff D. Rupp, Chair of Democrats Abroad Netherlands. "The DA Global Primary will give our members a chance to cast an in-person ballot from abroad for their candidate. Any qualified American can participate by joining Democrats Abroad."

HOW TO VOTE FROM NETHERLANDS

Whether you’re temporarily overseas or ‘going Dutch’, Democrats Abroad Netherlands brings us all together to keep connected to the political process back in the US.  Become a member – it's easy. 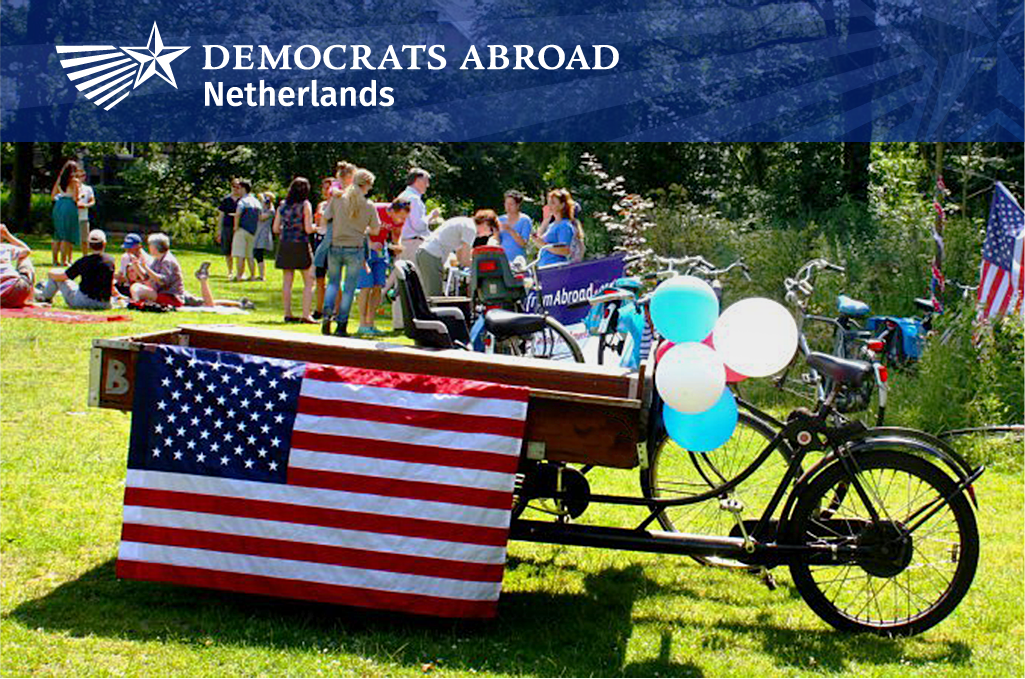 Voting from abroad
In Dutch, there’s just one word (stem) for ‘vote’ and ‘voice’. And we couldn't agree more. Your vote is your voice — and we’re here to make sure you’re heard! Together, the voice of Americans abroad is millions strong with the power to swing elections all across the country.

We vote in presidential elections, midterms for Congress, and local and special elections happening all the time. Our overseas voting website — www.votefromabroad.org — is the simplest, most effective way to make sure you never miss your chance to be heard.

Events & activities
Throughout the year, we get together to make friends and make a difference. As a member, we’ll keep you informed of everything from 4th of July celebrations and Thanksgiving dinners to issue-oriented actions. You can find all our events here — and please follow us on Facebook and Instagram to help spread the word.

Get involved
We’re all volunteers here and there’s always a way to get involved. We need help planning and organizing activities, helping voters get their ballots, and managing our database and social media. And every 2 years, we elect leaders who will guide us through the next election cycle. Whether you like meeting new people or working behind the screen, please get in touch to help make it all happen.

Join a caucus
Our caucuses are global teams focused on specific issues within our diverse community. We invite you to follow and get involved in the activities of any or all of them. We’d love to organize local caucus groups in the Netherlands, like our Democrats Abroad NL Youth Caucus, and are always looking for volunteers ready to take the lead.