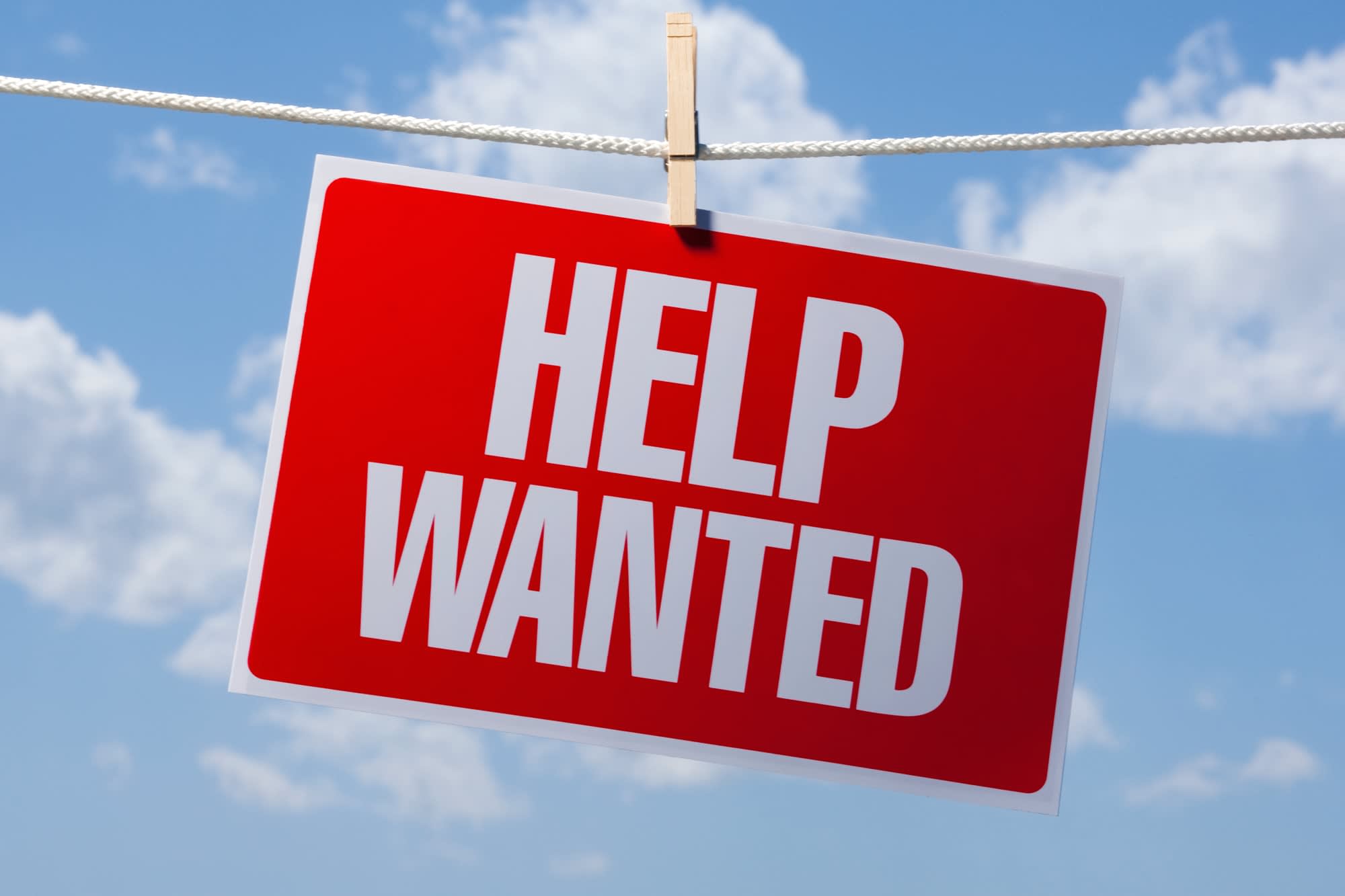 DA Switzerland has a few open positions in leadership and we're looking for fresh faces to fill them! If you've been looking for a way to get more involved, read on:

If you have questions about any of these roles or are interested in finding out more, please send an email to our Chair, Eric Burns.

As a way to highlight the impact of the many female glass-breakers over time, and to show examples of women who have successfully fostered equality and women's rights, the DACH Women's Caucus will occasionally share herstories. We hope you enjoy reading about the groundbreaking bell hooks, a Black feminist author. She insisted that feminism needs to be intersectional in order to actually make progress. 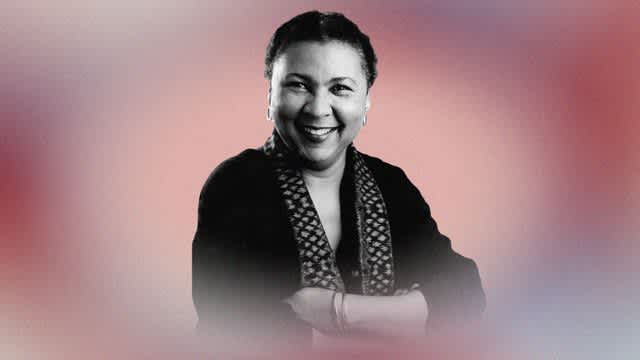 She insisted that the fight for women's rights had to take into account the diverse experiences of working-class and Black women.

bell hooks, whose incisive, wide-ranging writing on gender and race helped push feminism beyond its white, middle-class worldview to include the voices of Black and working-class women, died on Wednesday at her home in Berea, Ky. She was 69.

Her sister Gwenda Motley said the cause was end-stage renal failure.

Starting in 1981 with her book “Ain’t I a Woman? Black Women and Feminism,” Ms. hooks, who insisted on using all lowercase letters in her name, argued that feminism’s claim to speak for all women had pushed the unique experiences of working-class and Black women to the margins.

If that seems like conventional wisdom today, that is in large part because of the enormous impact Ms. hooks had on both feminism and Black women, many of whom had resisted aligning with a movement they felt was designed to diminish their experiences.

“I think of bell hooks as being pivotal to an entire generation of Black feminists who saw that for the first time they had license to call themselves Black feminists,” Kimberlé Crenshaw, a law professor at Columbia, said in an interview. “She was utterly courageous in terms of putting on paper thoughts that many of us might have had in private.”

Womanhood, Ms. hooks said, could not be reduced to a singular experience, but had to be considered within a framework encompassing race and class. She called for a new form of feminism, one that recognized differences and inequalities among women as a way of creating a new, more inclusive movement — one that, she later said, had largely been achieved.

She applied a similar, and equally trenchant, criticism to Black antiracism, which she said was often grounded in a patriarchal worldview that excluded the experiences of Black women. But she also recognized, in books like “We Real Cool: Black Men and Masculinity” (2004), that such a worldview resulted from centuries of oppression and exclusion of Black men.

Ms. hooks resisted the title “public intellectual,” but by the 2000s she had achieved celebrity status. Her books, written in a flowing, jargon-free style, were required reading across a wide range of college courses. She appeared onstage with the actress Laverne Cox and activists like Janet Mock, and on the bookstand of the model and actress Emily Ratajkowski, who cited Ms. hooks as inspiration while writing her recent essay collection, “My Body” (2021).

Part of Ms. hooks’s appeal was the sheer diversity of her interests. Her work, across some 30 books, encompassed literary criticism, children’s fiction, self-help, memoir and poetry, and it tackled not just subjects like education, capitalism and American history but also love and friendship.

In “Teaching to Transgress: Education as the Practice of Freedom” (1994), she argued that the American education system had been constructed to quell dissent and shape young people into productive workers — and that it was therefore up to teachers to push against the grain by showing students how to use knowledge to resist.

She did just that in her own classes, instructing her students to see critical thinking and reading as liberating acts.

bell hooks was the pen name of Gloria Jean Watkins, who was born on Sept. 25, 1952, in Hopkinsville, Ky., a small city in the southwestern part of the state not far from the Tennessee border.

Though her childhood in the semirural South exposed her to vicious examples of white supremacy, her tight-knit Black community in Hopkinsville showed her the possibility of resistance from the margins, of finding community among the oppressed and drawing power from those connections — a theme to which she would return frequently in her work.

Her father, Veodis Watkins, was a postal worker, and her mother, Rosa Bell (Oldham) Watkins, was a homemaker. Along with her sister Ms. Motley, Ms. hooks is survived by three other sisters, Sarah Chambers, Valeria Watkins and Angela Malone, and her brother, Kenneth.

Her early education took place in segregated schools, though she moved to white-majority schools once the state integrated its education system — an experience in navigating complex racial and gender hierarchies that she later drew on in her memoir, “Bone Black: Memories of Girlhood” (1996).

She was an avid reader, vacuuming up books and reading long past her bedtime. She dreamed of becoming an architect, and of leaving small-town Kentucky behind.

The 2022 midterm elections aren't until November but the primaries start in March with Texas. We highlighted some key races to watch that could turn State Capitols blue or change the balance in Congress.

Here are our races to watch. Which races are you watching in your state?

Texas: March 1st will be a rematch between incumbent House Democrat Henry Cuellar and progressive Jessica Cisneros who gave the incumbent a run for the money and held him to 51.8% in 2020. Will redistricting make this district ripe for Republican picking?

North Carolina: The state Supreme Court postponed the primaries from March to May because of two pending lawsuits that challenged legislative district maps. The U.S. Senate race has candidates on both sides vying for November since incumbent Richard Burr will not seek reelection. Will North Carolina turn blue?

Georgia: Stacy Abrams is back in the Governor race. Georgians are hoping for a Rocky-style knockout against Governor Kemp in November. Can Senator Raphael Warnock stave off a challenge from former NFL player Hershel Walker? 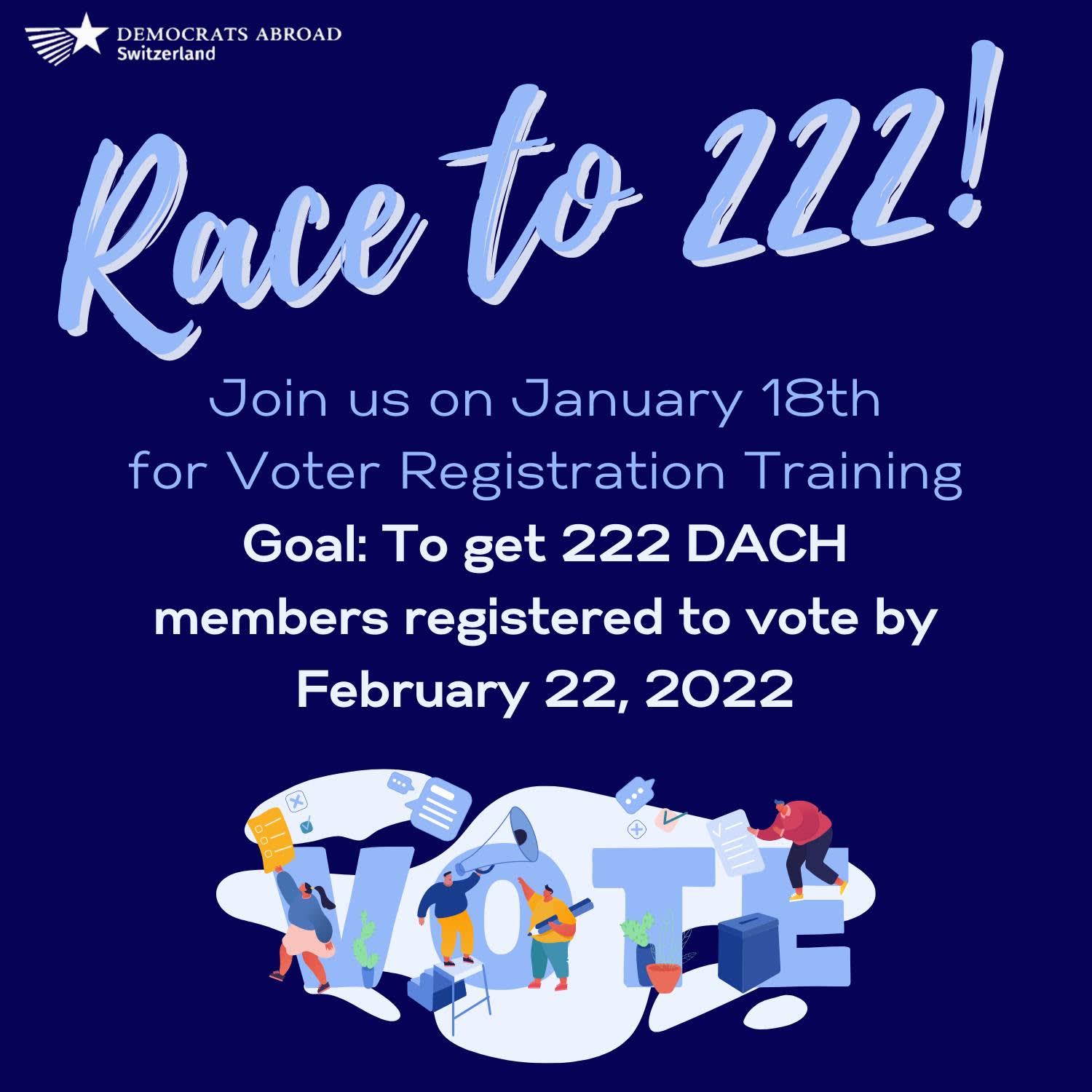 It's a new year, and 2022 may hold the most important midterm elections of our lifetime! To make sure that Democrats hold the House and Senate (and maybe pick up some Governorships and Secretaries of State along the way), Democrats Abroad needs to mobilize all of our members, as well as registering new voters!

First, go to VoteFromAbroad.org to register to vote and/or request your ballot(s) for 2022.

Then, join DA Switzerland at a Virtual Voter Registration Training on January 18th to learn how to request your own ballot and how to help others do the same. Voter registration will be an all-hands-on-deck situation this year!

To make the voter registration process more fun for our members, we have created a "Race to 222" campaign. What does this mean? We are trying to register 222 members by 2/22/2022. 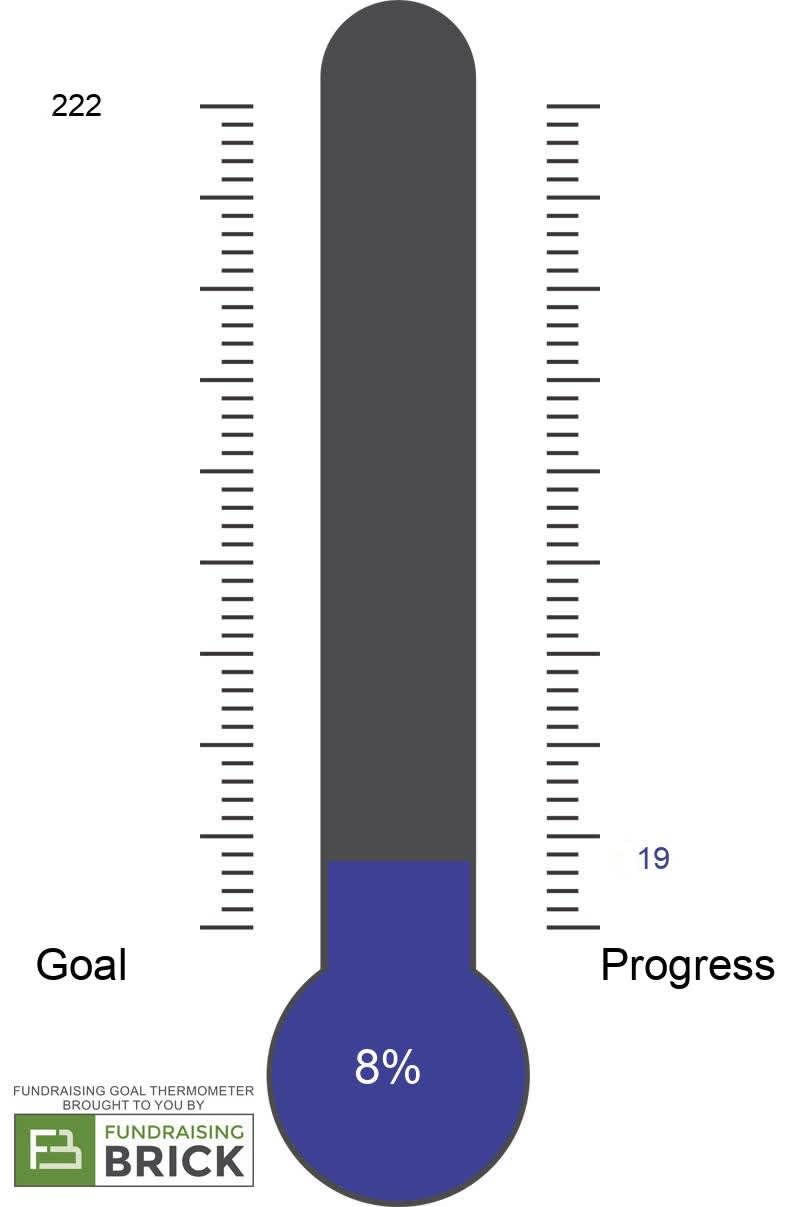 THANK YOU! You should be receiving a message from a DACH leader in the coming days with a special "Race to 222" graphic you can add to your social media accounts to help get the word out!

In the recent November elections, there are two main stories we should pay close attention to:
1.    Republicans flipped Virginia
2.    Candidates of color made history

Michelle Wu is the first woman and person of color to be elected mayor of Boston; Pittsburg elected Ed Gainy, the city’s first black mayor; and Abdullah Hammoud is now the first Arab-American and Muslim mayor of Dearborn, Michigan. These are just a couple of names that reflect the changing and evolving landscape of our country’s political leadership.

There are important elections to close out the year including run-off and special elections in Texas, Georgia, Iowa, Louisiana, Arkansas, and Massachusetts after the jump. 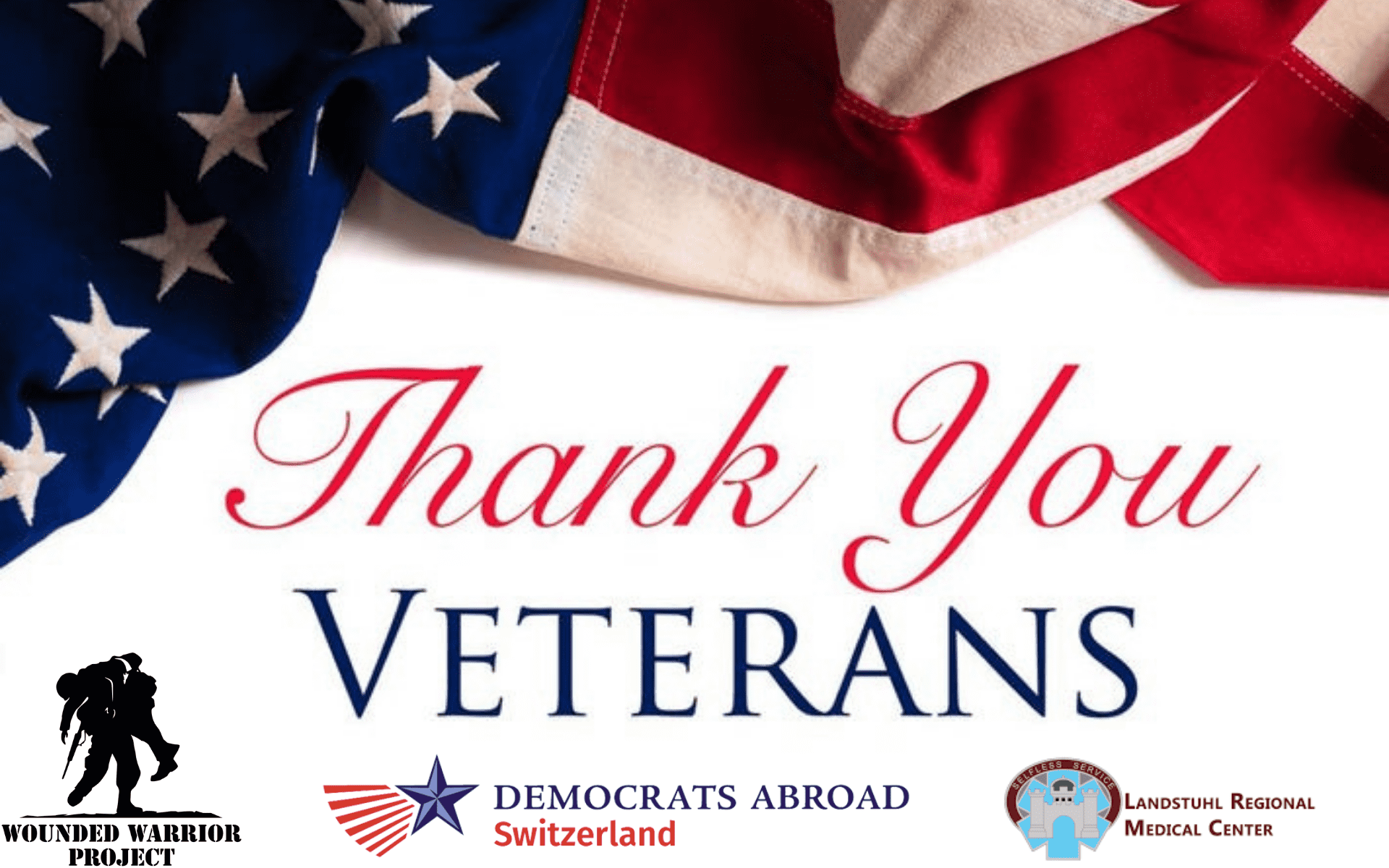 November has two great holidays: one offers Americans an opportunity to honor our US servicemen and women and the other to give thanks for our good fortune.

Just a few hours north of us is the Landstuhl Regional Medical Center, the largest US military hospital outside the US. On any given week there are around 100 active or recovering soldiers there. Some quickly return to their duty station, others can be there for a lot longer.

The Wounded Warrior Project and fellow support organizations in Landstuhl work with the soldiers to make their unexpected stay in Germany as comfortable as they can. Simple pleasures like Crocs and cozy hoodies, or vitals like socks and boxers can make a difference.

The Geneva Chapter of Democrats Abroad is running a donation drive from Veterans Day to right after Thanksgiving. We warmly invite our members to RDV with us from 10:00-13:00 at any of the following locations:

To get precise location on each day join the DACH-GVA Chapter WhatsApp group: https://chat.whatsapp.com/GcBMuXR2gMl14iYp0xUAoS

Working together, we can make a huge difference in the lives and recuperation of our fellow Americans abroad! 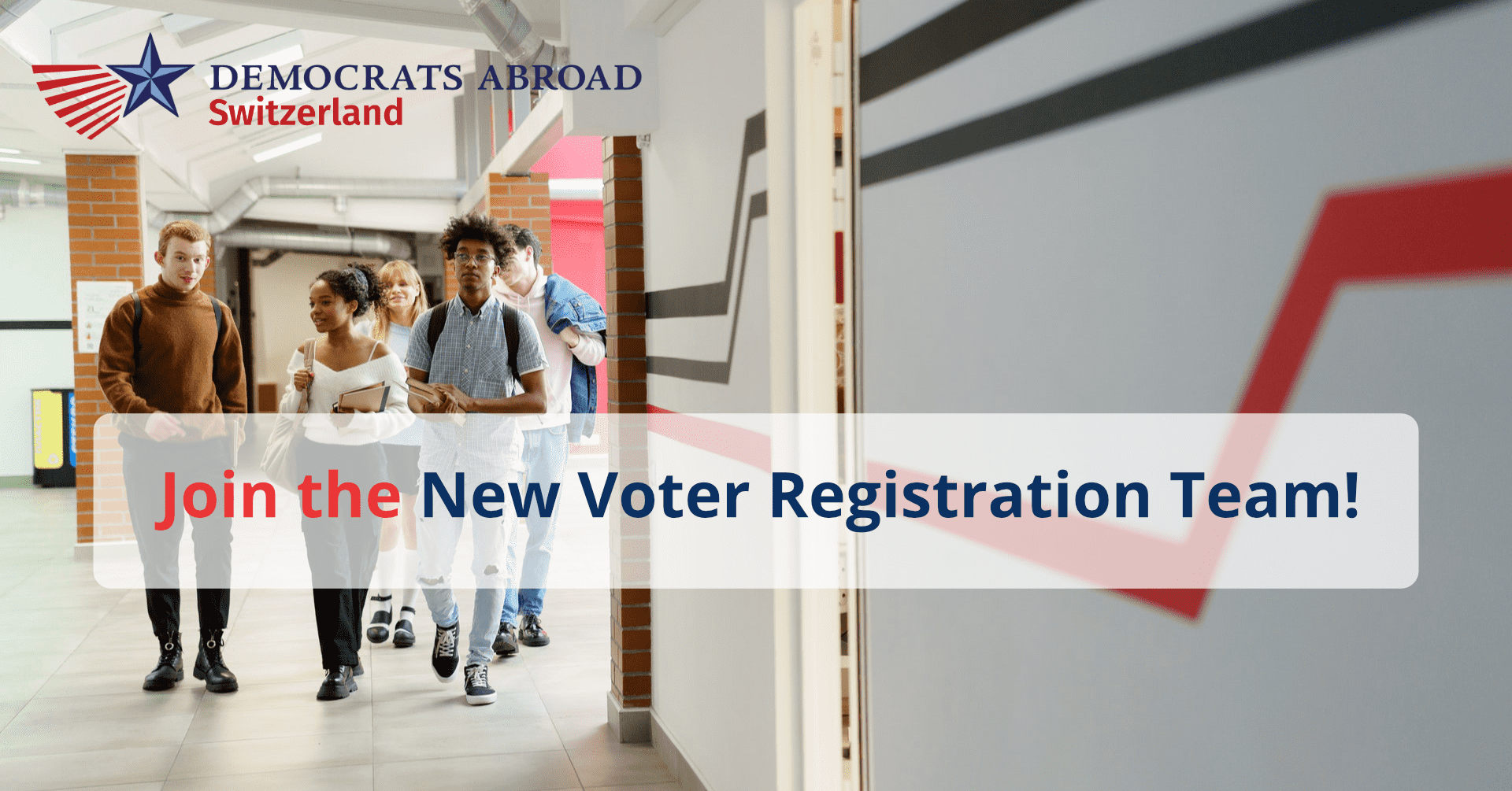 We are putting together a team willing to visit international schools and universities around Switzerland from February to May 2022 for the purpose of providing voter registration assistance.

Each visit would require a standing team of 2 to 3 DACH members from a pool of 5 or 6 members so that members could alternate visits. Team members will be required to take a registration training course which will be offered in January 2022.

Vivien Beetle and Joe Amato will be leading this project. We are looking for four more volunteers who have some flexibility in their weekly schedules.

We have designated the following schools as having a large enough American community to warrant a visit, and for which we would offer our help to the entire community (students, teachers and parents):

We also ask our fellow DACH members if they have a contact for the Parent Associations from any of these schools.

Additionally, if you are aware of an international school with a fair number of Americans that is not on the list, please contact Joe Amato at [email protected]. 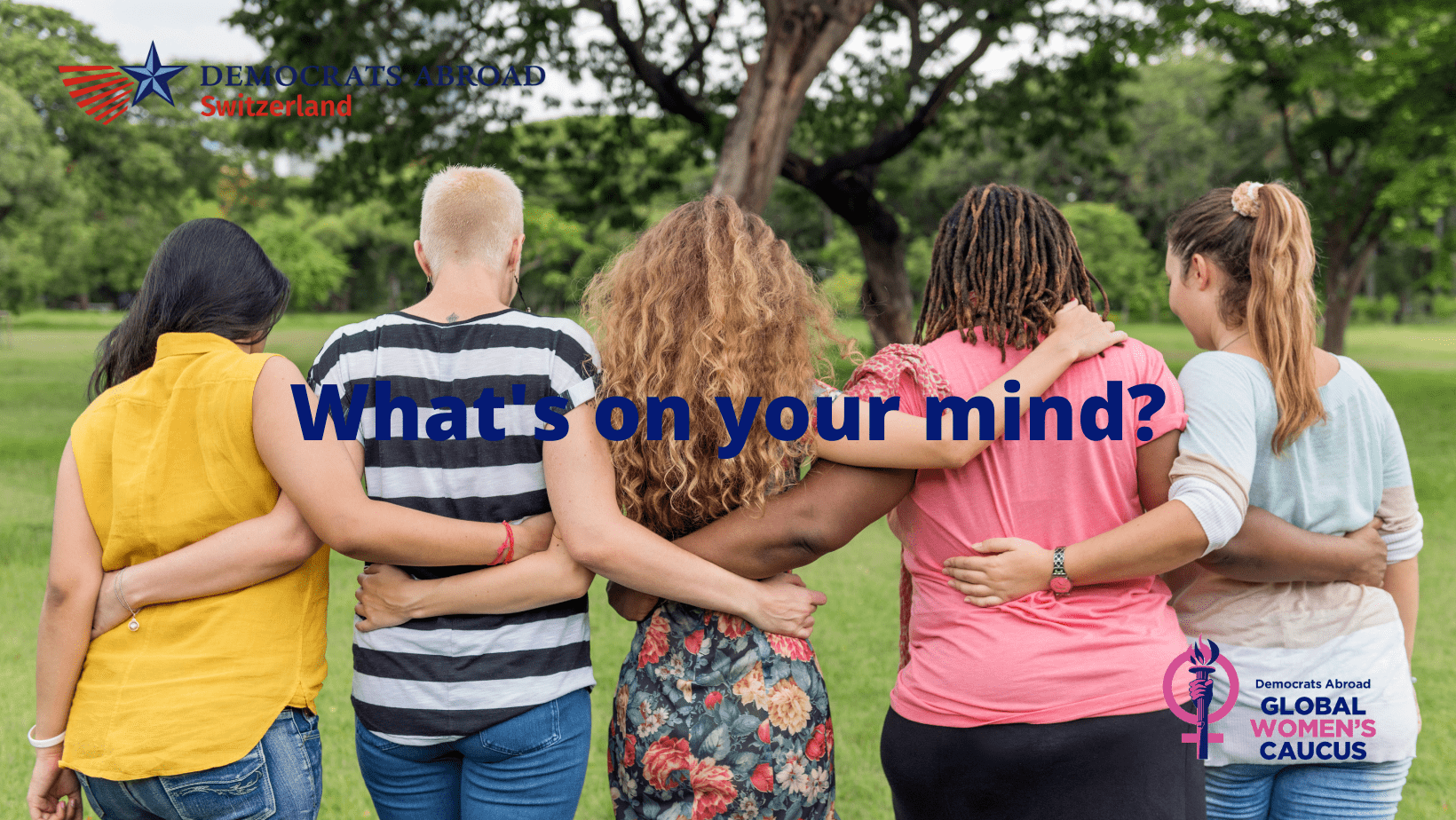 The DACH Women’s Caucus would like to know how we can best address your concerns. Could you please take this brief survey to share your thoughts? You can complete the survey via the link here.

1. What topics would you like the DACH women’s caucus to address:

2. What types of activities would you like the DACH women’s caucus to organize?

3. Are you interested in organizing any activities for the DACH women’s caucus? If so, please indicate the type of activities.

4. Do you have any other ideas, suggestions, questions or input for us? Please leave a comment here.

The 2022 mid-terms are almost a year away and Tuesday, November 2nd could be a preview of what's to come. Regular gubernatorial elections take place in Virginia and New Jersey as well as the race for New York City Mayor. 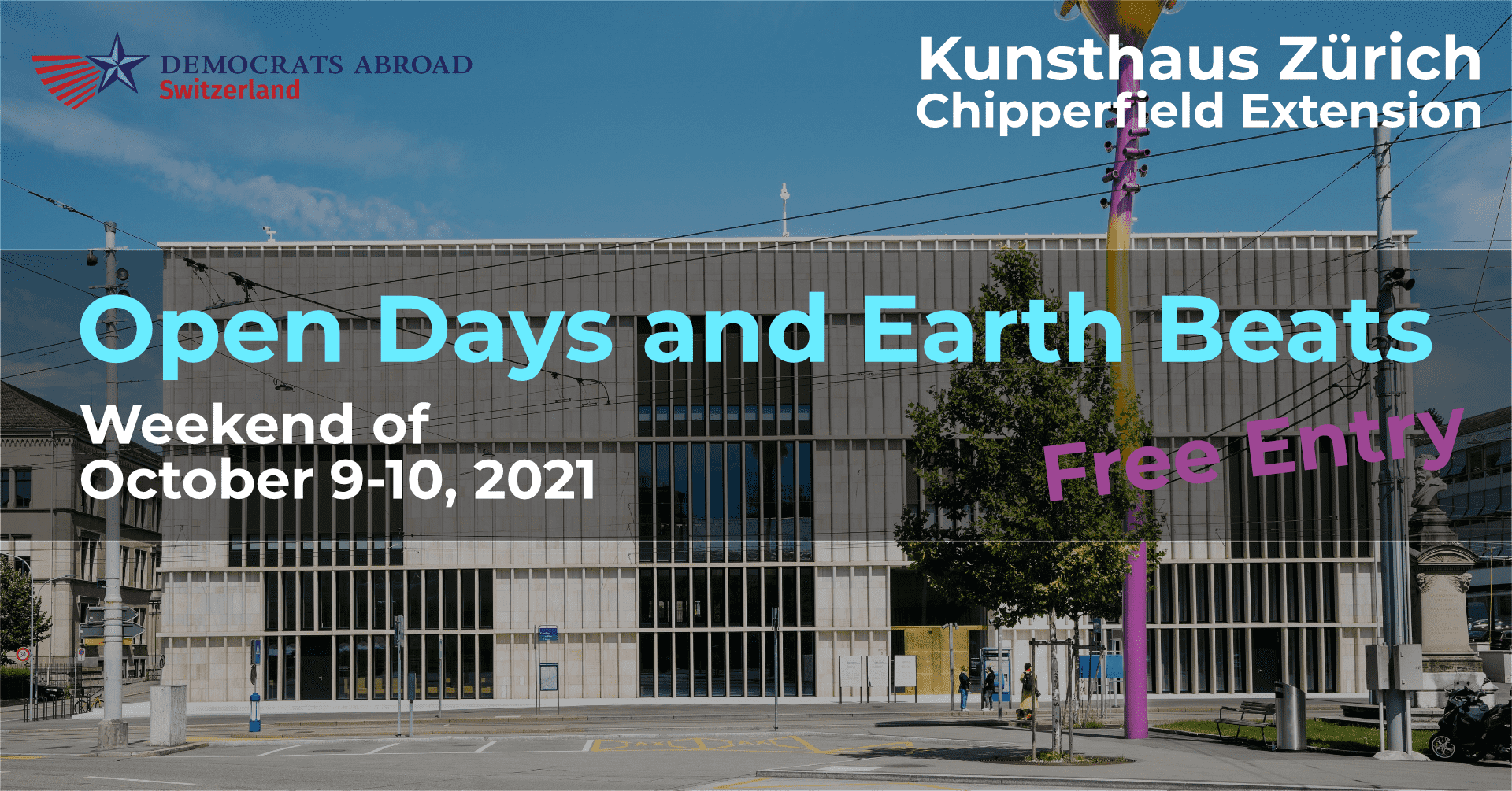 After 13 years in the making the Kunsthaus Zurich Chipperfield extension is finally open to the public and as a thank you the museum and the city of Zurich are offering free entry October 9 - 10. It's also a perfect time to check out "Earth Beats," the museums look at climate change through the eyes of world re-known artists like Vaughn Bell, Anna Jermolaewa and Ana Mendieta.